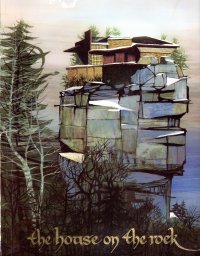 Strangely enough, I am pretty sure that I read a later version of this book not long after I visited in 2015. Although I have not done a direct comparison of the two, both are copyright by the House on the Rock, so this book is essentially what I would have picked up if I had visited the House on the Rock if I’d had an intact family that took vacations in high school.

So my memories of the House on the Rock track with the ones I had when I originally read the later version (and the trip was fresher in my mind): A lot of the rooms, especially the original ones, were dark, and I didn’t remember them except as a block of the dark rooms. I remember the giant carousel, some of the automaton music machines, and the room with the little drug store automatons.

Other rooms that I remember, such as the giant sculpture of a sea monster fight and the infinity room (the finger of glass that extends over the valley, where you can walk out and look around) are represented in the back of the book with artist renderings because they were only then under construction. Well, the effect was to make everything else feel like I had seen it after riding out to it in the back of a 1967 Chevy Impala.

A nice return to a memory. I am hoping to get back to Wisconsin this year or next, but not the House on the Rock. I have been, and I have the souvenir books.