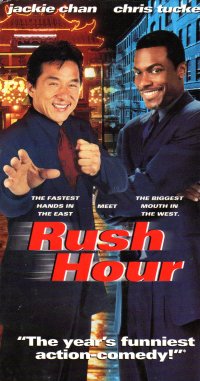 It’s our new-ish New Year’s Eve tradition with the boys to watch a movie and play a game to pad the hours until midnight, and this year we watched Rush Hour. Which, apparently has two sequels.

I don’t remember if I saw this film in the theatre–I can hardly imagine a time where we went to the theater and saw ten or more movies a year. I don’t know if I see that many at home these days. But that’s because all my books are calling in way the my accummulated videocassettes and DVDs are not. This film, though, was on a DVD, but it’s a little clearer now that we’re running it through a different receiver.

If you don’t remember the plot: Basically, Jackie Chan is a Hong Kong police inspector who breaks up a crime organization right as the British are handing Hong Kong over to the Chinese. The Chinese consul to Hong Kong ends up in Los Angeles with his wife and young daughter, who is close with Jackie Chan (come on, Jackie Chan is playing Jackie Chan, as he always does). The daughter is kidnapped for ransom by the very criminal mastermind whose organization was disrupted in Hong Kong, and the consul imports Jackie Chan to help the FBI. The FBI, though, wants nothing to do with the inspector, so they bring a loud, brash, unconventional LAPD detective, Chris Tucker, playing Chris Tucker, to entertain Chan. But they end up solving the crime after various set pieces and beginning to understand each other’s culture.

So it’s a funny movie. But twenty years on, the honeymoon for Hong Kong is over, and one cannot help but wonder how much the Chinese government influenced the film to put China in the best possible light. Even then. I didn’t sit through the credits, but I would not be surprised to see at the end a thank you to some Chinese agency or bureau. Twenty years on, we all look at things with a bit more of a gimlet eye.

But the film is my boys’ first exposure to Jackie Chan (and Chris Tucker). A virtual decision tree unfolds: What next? The Jackie Chan path? Rumble in the Bronx? That’s rated R. Perhaps Legend of the Drunken Master? Or the Chris Tucker path? Certainly not Friday, but they’re old enough for The Fifth Element by now. What about the Jackie Chan+1 fish out of water path? Shanghai Noon has Jackie Chan playing Jackie Chan and Owen Wilson playing Old West Owen Wilson. I haven’t actually seen that one yet. However, it would require buying the movie–and we own many of the others listed, and I’m saving my money for jazz and metal CDs.

Time will tell, and it could very well say, “You won’t decide this question until next New Year’s Eve.”