I mentioned in July that I resubscribed to the Wall Street Journal in part of a paper-subscribing frenzy and because we opened a brokerage account for our oldest for his birthday.

Well, the oldest has not shown much interest in the paper, finance, or his brokerage account (he is in high school and has is own phone now, and donchaknow that meatspace as the old timers call it is for old timers). And, as is the norm, the papers started piling up unread until I would (or will) months later tear through them weeks at a time, only glancing at the headlines and shaking my head, thinking We had it so good then; I know how all of this turns out.

And, well, to be honest, I’ve found their reporting to be a little less that straight up during the election season and post-election. 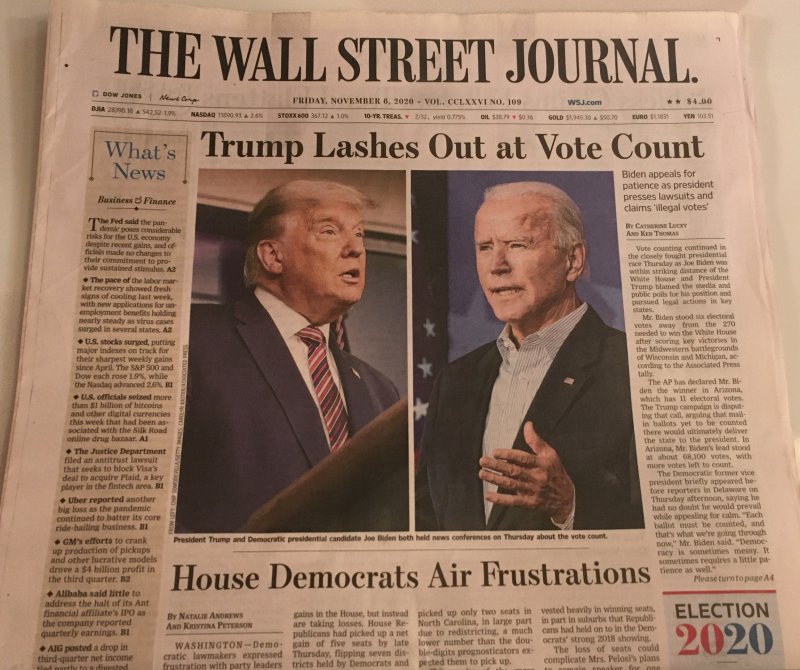 Trump lashes out, having a tantrum, but the Democrats, adults that they are, air frustrations. Got it, straight up news there.

You know, I can get that sort of thing from a Gannett rag for a fifth of the price.

You cannot cancel your subscription on the Web site; you have to call in. I did, and I was on hold for thirty minutes before I got to a customer service rep who offered me a free two weeks to reconsider–or to forget that I want to cancel, or to dread waiting thirty minutes on hold again. I declined.

Because the paper made me sign-up month-to-month (cynically, I think so that they could easily raise the price without my notice at their first opportunity). This means I will not have spent a whole year’s worth on it, and it means I still have another month coming before it ends.

I am pretty sure that it will stack up unless I make a concerted effort to clear it out, and I might as I try to get some sort of record player running this holiday season which might involve putting a component system in the parlor. If the turntable I bought at a garage sale seven years ago works, and if the failing receiver I have can funnel audio to speakers properly, and so on.

At any rate, this has also made me realize that I haven’t seen a Wright City Journal (WCJ)–to which I also subscribed in July–in months, so I’ve reached out to them to see what’s going on. I think I’d rather read it than the Wall Street Journal for the most part.

But you know what I will miss? The feature writing in the Personal Journal and Friday/weekend sections along with the book, television, movie, and music reviews. The same things I rather miss out of the National Review. I wish we still had general interest magazines that carried that sort of thing regularly. Let me know in the comments if you have some recommendations. First Things also has a pretty good back section, although its selections are fittingly theological and Catholic in nature.