Gentle reader, I have wanted to be a real writer for a long, long time. When I first started keeping track of submissions, I used notebooks to track which stories, essays, or poems (later novels and plays) I sent and to which publishers along with the date I sent them. I can remember the powder blue cover on the notebook where I entered my first few lines in the middle 1980s, when I precociously started sending my middle school and high school work to major national magazines (and began amassing a vast collection of rejection letters). 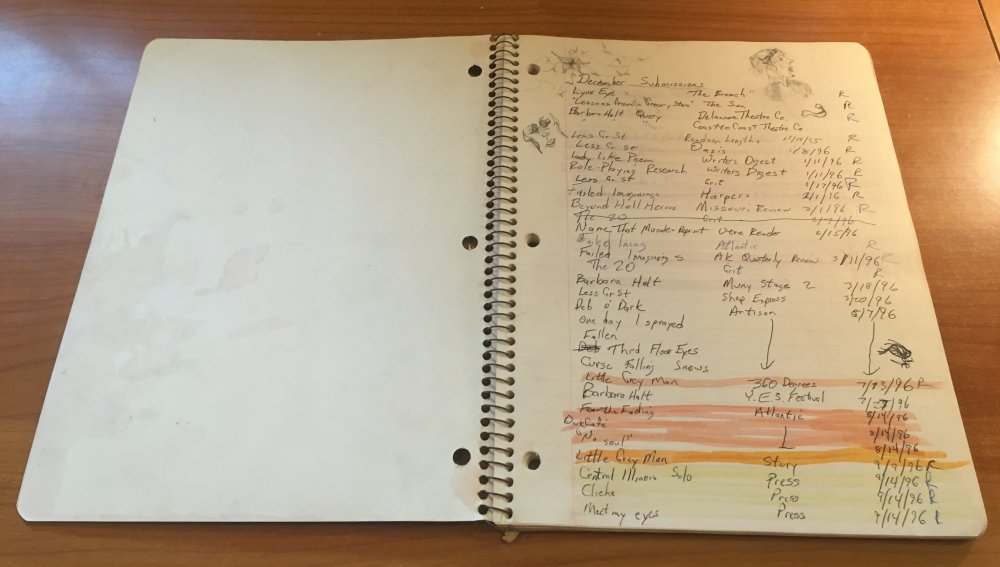 I started a second notebook, briefly, in December of 1995 (depicted above). I’m not sure if I misplaced my original notebook or if I filled it up; I haven’t laid my hands on it this morning, so it could be either (or an invitation to clean my office closet whose order was set when we moved to Nogglestead and has now turned to disorder as I have thrown things in and closed the door).

Somewhere around the turn of the century, I started using an Excel spreadsheet to track them. The file named Submission Record.xls has a first worksheet of 2002.

I certainly haven’t been able to fill up a notebook this century. According to the spreadsheet, my annual submissions were as follows:

What’s funny is that I trailed off keeping this log when I started working mostly through email. I don’t know if I thought that emails would be a good enough log. More likely, though, I stopped keeping track because most of my writing after 2010 or so has been nonfiction, professional articles, many of which I have placed with testing and quality assurance magazines (printed or PDF) and Web sites (and sometimes LinkedIn). So they don’t count as real writing in the sense that creative writing, short stories, personal essays, and poems do. Kind of like when I work on technical writing projects I don’t think I’m doing real writing.

Well, gentle reader, I have officially resuscitated the submission record after five years. I finished a poem last November that I think isn’t half bad. I came up with a short little poem the other night before bed, and whilst at the laundromat a week or so back, I finished another poem. Which is three, the magic number for submission to the local university’s literary magazine. Which I promptly did.

There’s no telling whether Brian J. Noggle, Poet, will see any more success in his forties than he did in his twenties. But I am a little pleased to have written poetry again regardless of the outcome.