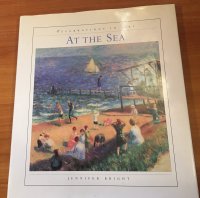 Instead of a single artist’s monograph, this book collects a number of paintings of the sea from Pieter Brueghel the Elder’s “Fall of Icarus” to modernist twaddle like Jackson Pollock’s “Blue (Moby Dick)”. So you can take one subject like this and kind of chart the evolution of painting through the depiction of sea-side scenes.

So if you’re not sure of whose art you might like, or if you can’t buy complete artist monographs for a buck each at a sale and don’t want to gamble, this might be the survey course to get you started. You can get a flavor of some old masters, some Impressionists, and some of those damned twentieth-century artists who made everything look like rubbish, and you can be reasonably sure that the blue somewhere on the canvas is supposed to be water.

I enjoyed most of it. I was familiar with some, like “Fall of Icarus”. It reinforced a bit of my taste and perhaps nationalism in that I think early twentieth century American artists were able to resist some of the continental foolishness for a while, but eventually succombed to the modern tastemakers, unfortunately.

So a nice browser between deeper readings or deep throws down the field.