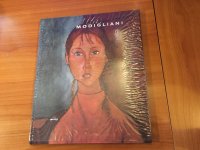 Have you heard the name Modigliani? I had not. He lived a brief consumptive life around the turn of the century in France, and his art work is somewhere between the Impressionism or whatever Gauguin did and Picasso; the images are representative but distorted in proportion and brutal in execution. He was only starting to get some recognition when he passed away from tuberculosis, so he’s really only known amongst art people, and perhaps fewer of them as we go along.

It’s probably fitting that if you talk about art that everyone kind of knows and artists who a lot of people have heard of, the names really taper off in the twentieth century.

Perhaps a twenty-first century reboot of the Teenage [sic] Mutant Ninja Turtles: The Next Generation with turtles named Matisse, O’Keeffe, and, uh, some other lesser know artists would re-inject them into the zeitgeist. Or not.