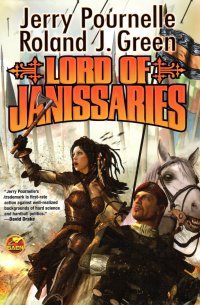 I miss Jerry Pournelle’s Chaos Manor blog. I used to read it all the time, and I corresponded with Dr. Pournelle from time to time–he cited me on the blog a couple of times, and he bought my poem for There Might Be War: Volume X. In the months leading up to his death, he mentioned he was working on another Janissaries novel. This year, that book, Mamelukes became available. I ordered it; as I hadn’t actually read the first novels in the series, I ordered an omnibus edition of them as well. Which is how I came to possess this book. When I finished Sixth Column (in August!), I picked this volume up. It helped that it was on the top of the stack.

At any rate, this book collects three books: Janissaries, Clan and Crown, and Storms of Victory. Basically, the story is based on the question of whether a company of Marines could conquer the Roman empire. A squad of mercenaries on a CIA contract are surrounded on an African hilltop in the late 1970s. As they’re about to be overrun by hostiles, a flying saucer appears and makes them an offer: Come act as their agents on a distant planet. Or die.

So the mercs are whisked to a planet where they’re supposed to farm a drug for the aliens. They’ll have to get the locals, humans, to help by any means necessary–it turns out that there are humans throughout the galaxy. On this particular planet, they’re kind of representatives of different eras of human history–barbarians, Romans, and so on. The mercs discover that the aliens end the drug’s multi-year growing opportunity–which is made possible when the most distant star in a trinary system makes its approach by bombarding the planet back to the stone age–not that it gets that far from it.

When they land, the former leader of the group is deposed and ‘exiled’ by his second-in-command. The exiled man is given a gun and sent away, and he encounters the daughter of a barbarian chieftain. He falls for the girl and befriends her priest, and he proves to be an effective war leader as he has studied military history–which comes in handy when he leads the barbarians–now pikemen and cavalry–against a Roman legion effectively.

So that’s the three books, really. The first is the best as it lays the conceits and the world. The characters are developed and the basics of the long arcs and subplots appear. But the second and third books in the omnibus deal a lot more with the intrigues of medieval leadership and military engagements. They’re about making the military alliances and then fighting battles with them. So it gets a little less engaging and a bit repetitive in the last 500 pages.

At the end of the third book, some of the subplots involve interstellar intrigue which are not resolved and the main arc, whether the earthmen fulfill their obligation to provide the drug and perhaps save the planet from the skyfire that falls every couple of hundred years. I guess it’s good that the fourth novel will probably answer these questions.

But I have spent the better part of a month in this world, and as I found the last two thirds of this volume a bit less than the first, I have not picked up the fourth book of the yet and might not for a while. But it’s on the top of a stack, so who knows?