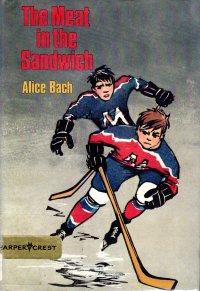 This is nominally a children’s book. I bought it almost twenty years ago from a table in the foyer of the Bridgeton Trails branch of the St. Louis County library back when we lived in Casinoport. We didn’t have children then, but if I was going to have children, I would want them to read a book about young hockey players (as my beautiful wife and I watched every St. Louis Blues game at that time). As it turns out, a couple years later, I had children (well, my beautiful wife gestated and emitted them, but you know what I mean). A couple years after that, they could read, but neither of them were much interested in the old-timey children’s books I had, favoring the cartoonish children’s books of today. A couple years later, I finally picked up this book since there’s no hockey season. Was there one earlier in the year? It seems so long ago.

I say “nominally” a children’s book because, although the main character is in fifth grade, it’s 182 pages of dense, adult-focused text. I mean, I know kids books today are dumbed down, but compared with other kids books of the past like the Great Brain series and the Little House series, not to mention the Peggy Parrish books, and this is freaking Ulysses.

So the main character is a fifth grader who has two sisters (one older, one younger, so he’s the meat in the sandwich of the family), a father with a job at the electric company, and a stay-at-home mom (in 1975, this was still the norm or the ideal, gentle reader). His best friend and the star of the elementary school hockey team lives with his mother after his parents divorced, and that’s a big deal in 1975. A new kid moves in, a competitive kid whose father drives his own son and the main character to be better athletes, but not without tension (the usual “we train hard, and everyone else is a loser” mentality). When a new hockey coach splits the team into two squads, the main character and his athlete ‘friend’ are on different squads, so they’re not really friends any more.

In addition to that main story line, the protagonist’s mother wants to pursue her dream of being a painter, so the whole family has to divvy up the chores, including the cooking and the cleaning. His friend’s divorced mother pursues her dream of opening a little swap shop in her home where people can trade things they need without spending money. The protagonist’s mother offers her paintings in the shop, but nobody is interested in her abstract works which her children don’t think are very good.

The turning point in the book comes in a scrimmage between the two squads, when the protagonist is checked hard into the boards by his former friend. The protagonist ends up knocked out and with an injured shoulder, and as he mends (and hides from returning to school in shame), he rethinks his life and determines, hey, he doesn’t have to be a star athlete after all!

So, yeah. The voice is too sophisticated for a fifth grader, and it reads more like what a 1970s feminist would like to instruct little boys. Women’s empowerment and don’t be a boy. Learn to love the liberation of the new world which will lead to the utopia we see today. Meh.

Perhaps I’m a bit down on the book because I come out of that liberated millieu to some deleterious effect. But, yeah, there’s probably a reason why this book was marked $.25 after sitting in a library, likely unread, for 25 years. I can’t imagine what a millenial child would have gotten from it.