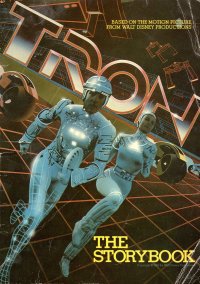 Clearly, I am not above reading children’s books to pad my annual total (I did just complete the Little House books, for crying out loud), so why not one of those movie-novelizations-for-children that were popular in the 1980s. I say popular based on the limited knowledge that the Star Wars Storybook was disseminated far and wide (I gave the copy from my childhood or from my beautiful wife’s childhood to our children and still see it at sales from time to time in the wild) and that this book exists for the movie Tron. Perhaps they’re the only two movie storybooks ever, and I just happened to chance upon them.

At any rate, it’s been a while since I’ve seen Tron–I must have rented it around the turn of the century. I know back then, I got into the habit of making sound schemes for my Windows computer, and I set a Tron theme that made it say, “Greetings, program!” whenever I launched an application and the Master Control Program saying “End of line” whenever I shut the computer down. I also had a sound theme for the original Battlestar Galactica, but that’s not relevant since I’m not talking about its storybook.

If you don’t know the story, it’s about a company called ENCOM that’s into artificial intelligence (although they didn’t call it that then). The head of the corporation is partnered with the Master Control Program, which is hacking into and taking over other systems. A renegade programmer, fired for his independent thought, now runs an arcade and is trying to hack into the system to find the goods on the corporation. A still-employed programmer, suspicious of the company, has created an independent security auditing program that he wants to run. So they break in to the offices, and the renegade programmer, Flynn, gets scanned into the system and learns about its whole anthropomorphized ecosystem under the control of the Master Control Program and his heavy Sark.

To be honest, even if you do know the story, that’s it.

The technology is steeped in mainframe metaphor, with all of the computer terminals connected to a big computer somewhere, so it’s a little different than what we experienced with the personal computer revolution. Although I suppose if you replace ‘mainframe’ with ‘cloud’ it’s not that dissimilar any more.

At any rate, the storybook rather indicates the prosaic vs. special-effect driven coolness in the movie in that the setup for the movie, before Flynn is scanned into the computer, is a full third of the book. Then the middle third is a bit of introduction to the computer world, but by the midway point of the book, the pages give over to pictures with brief descriptions of the action.

So it’s probably a better reminder of what you saw in the movie than a separate accounting.

But it reminded me that I haven’t seen this in a long time and that my boys (and, admittedly, my wife) have never seen it, so I have since ordered it. Amazon then proffered me several other science fiction movies of the time period, such as The Last Starfighter and others that I already own, thank you very much. I was almost ashamed to have Amazon suggest those films. More ashamed than I am at reading a kid’s storybook anyway.