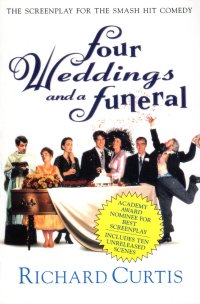 You know, I actually saw this film once, probably on videocassette when it was fresh and Hugh Grant was a leading man and I was dating a girl who liked these sorts of films. And perhaps thought I was something like Hugh Grant. But all I remember, really, was whose funeral it was, and that Hugh Grant was wooing Andie MacDowell.

So I’m not really going to go into the plot much here but to contrast this screenplay with the plays I generally read. The screenwrighter says it took him a long time to write it, and I believe it, but contrasted with a play for stage, it’s just a bunch of scenes, camera directions, and very, very terse dialog. We get scenes with a single line or a single word (generally fuck) and then we’re elsewhere. It’s the nature of film making versus staging a play, and I get it. I had a screenwriting class, surely, and I’m pretty sure I read Mamet’s book. Somebody’s book.

But I tend to think in terms of drama, and Heaven knows I read more of it than screenplays. So I favor the other over this style, especially for reading. It works better for films qua films, I know.

At any rate, the book also contains some appendices that give some insight into professional screenwriting, including deleted scenes, marketing concepts and brainstorms, and the need to adjust the language to fit an American television cut.

So worth more for these insights rather than a good read. And it’s probably better as a film than a text to enjoy on its own.