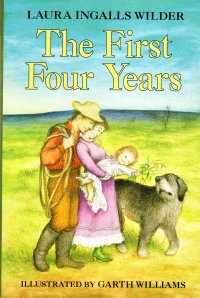 This book has an introduction to it written by Wilder’s attorney who explains the provenance of this book since Laura Ingalls Wilder did not publish it, and it did not appear until after Rose Wilder died. So it was published by the estate, the intellectual property machine that later came up with other “generations” of Little House books likely not envisioned by Laura Ingalls Wilder herself. And I can guess why.

This book is short, only 134 pages, and it outlines the first four years of Laura and Almanzo’s marriage, their hardships holding onto both homesteads Almanzo had, and the birth of Rose. The book does not go into details, and it does not include actual scenes, really, between the characters.

What we do get is a lot of bad things happening. Almanzo buys a lot on credit, and his crops fail due to new and inventive ways (a hail storm right before harvest, four days of extreme heat before harvest). He retrenches a bit, but at the end, their last shanty burns down. And the book ends. The Wilder family moves to Missouri afterwards, but On The Way Home is not considered part of the series generally.

I can see why and how this book was not included in the books Wilder published. The books through These Happy Golden Years are romanticised, where the men are generally competent–although some hints of less do appear–and the families generally come out okay at the end of the book. The earlier books in the series describe “Laura”‘s childhood through her marriage, and the marriage and her moving into her first house as a bride kind of cap that story arc. This book, on the other hand, does not really provide much of a coda to the series or cap it like the end of These Happy Golden Years did.

So I can see why she was content in her lifetime to stand pat on the books as she published them. Because they were uplifting and set a good example, whereas this book lacks that.