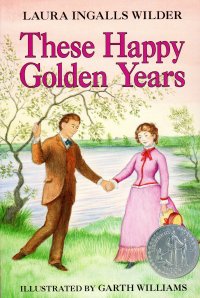 Strangely enough, this is the first Little House title I owned. I received a copy of These Happy Golden Years from my rich aunt, the one who just passed away, when we lived in the projects (as I recounted when I reported on Captains Courageous back in–Jesus and Mary Chain–2010). The particular volume I read was not the same one gifted to me forty (Love and Rockets!) years ago. When my boys came of reading chapter books age, that volume was passed up to their book shelves, and it’s likely still there as a young man’s interest is not in a teenaged girl’s ‘high school’ years in the late ninteenth century. Mine certainly wasn’t when I was younger than they are now. Which means this book might surpass by a decade Captains Courageous as the longest time a book has been on my to-read shelf before I read it. Given my advancing age, it’s unlikely this mark will be surpassed by anything I’ve boughten myself, although it’s entirely possible that I will get a wild hair and read Nobody’s Buddy or something else my aunt gave me back then to set a new record.

But that’s a long paragraph not apropos to the book itself. This book follows close on the heels of Little Town on the Prairie. And by “close on the heels,” I mean it picks up immediately after. Laura at 13 gets a teaching certificate and goes to teach school in a settlement 12 miles away from her family and the life she’s known. It’s only for eight weeks or so, and she’s bunking with one of the families at the settlement, but the family is unpleasant–the mother wishes they would return back east–and it’s only that Almanzo Wilder comes to get her to bring her home on the weekends that makes it bearable. After that stint is up, she returns home, returns to school, works a bit, and Mary comes to visit a couple of times. As I said, it rolls up a couple of years that encompasses her friends pairing off with boys/men as she pairs up with Almanzo Wilder, goes on sleigh and wagon rides, and eventually marries him.

So we’re passed the childhood now and will get into the two remaining books that are about her adult life but still geared towards children. I’m kind of sad to be coming toward the end of the series. But I do have other things to read.