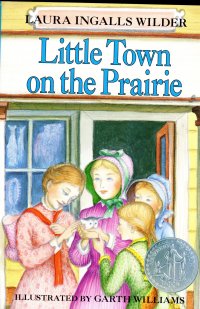 I read The Long Winter in December, and I’ve pretty much determined I’m going to read the rest of the series by the end of the year, so here we go.

Well, sort of–I had shelved These Happy Golden Years out-of-order, so I actually read a couple chapters of it before I saw in the front that I was going out of order, so I set that aside and jumped into this book.

This book sees Laura get a job in town for a couple of weeks that will provide some money to help send Mary to college. Mary goes to college; the town develops a little more. Winter is not so bad the next year, but to alleviate cabin fever, the town decides to have weekly town meetings called Literaries that start out with a spelling bee and end with a blackface minstrel show (OUTRAGE!!!!!!!!!1!). Well, I would be outraged, except, as you all know, I am guilty of reading the banned literature, so I’m too guilty to be outraged.

The book ends with a lead-in to the next book, I can tell you as I read the first bit of it: Laura takes a teaching position at a small settlement 12 miles away (which is about the distance I traverse several times a day to deliver and pick up my boys from their school in the city). In the latter half of the ninteenth century in North Dakota, though, this was quite a distance, and she would live with a family in the settlement and not see her family–or her new beau, that Wilder boy, very often.

The book continues to evolve as the character ages. In this book, she pays more attention to clothing and fashion than in other books, and the subtle content changes over the course of the series to reflect the age of the character. I appreciate the effort and effect.

Thanks to this, I’ve learned the origin of the term “lunatic fringe”: It originally meant bangs (which Laura wants) before Teddy Roosevelt turned it into a political insult (source).

I also felt a connection with the book in that Laura receives for Christmas. She has a 1883 blue and gold copy of Tennyson’s Poems. I myself have a brown copy of the same book that was inscribed by the then-owner in 1893. So Laura Ingalls and I practically owned the same book. Although this was not her copy obviously. Not only do I have a copy of this volume, but at some time I happened upon a second and gave one to my mother-in-law.

At any rate, as I mentioned, I’ve already started These Happy Golden Years, so I shall probably finish that at some point in the next couple of weeks. I’m sure you can’t wait to hear my twee reflections on the next children’s book I plan to read.