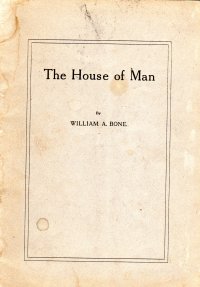 This book, like Red Plush and Black Beard, is a pamphlet-sized publication that I probably bought in a bundle. It’s subtitled “A Lecture”. Research indicates that the presenter was a humorist/poet who performed on the chautauqua circuit (see this and this where he was on the bill with Carrie Nation). Hey, I know what a chautauqua is! So although one might, at the outset, think it’s a piece by a clergyman and this represents a sermon or theological lecture of some sort, it’s not.

What is it, then? Well, I suspect an entertaining and potentially uplifting/inspiring way to pass an hour or so in a tent in the summertime.

His conceit is something out of Maslow’s heirarchy of needs or chakras: basically, mankind consists of four “floors”: The base needs, the heart, the intellect, and the soul, and he ties them to levels in the body. He then goes onto a little politics trying to stretch the metaphor, but it doesn’t work.

The prose is chock full of poems of the author’s own creation to illustrate the point. The poems aren’t half bad; better than the typical grandmother poetry, but they would have to be–he wrote and probably refined these poems for performance.

In the middle of the book, he goes into a riff about black churchgoers and a sermon delivered to them in dialect, which includes the word niggers, which will probably give modern audiences the vapors if not make them faint right out. Of course, it’s not racist–it’s a black preacher telling a black congregation to quiet down–kind of like its appearance in modern rap songs (but in this case, it’s a white author using it, so: vapors).

Wait a minute, Brian J., did you just type out the whole n-word? I did. It’s just six letters, not a magic talisman. 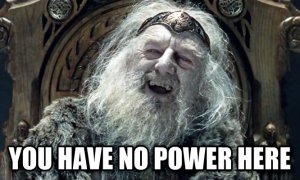 I’ve had to type it and a lot of other squicky words in testing content filters in my day job. And I grew up in the projects, so I’ve heard it. I might even have said it, but I cannot remember doing so and probably wouldn’t have as I was a small white boy in the projects, and saying THE BAD WORD in anger would likely have led to a beating. But that was in the 1970s, when Blazing Saddles was made. Somehow the word got worser since then, if you can imagine. A word. But I digress. And I used a derogatory term for Caucasians in this paragraph, and you probably went right over it.

He also uses the term mick in a couple poems, but, again, they’re Irish people calling themselves that. So according to modern accounting, I guess he’s twice as anti-Irish as Racist. But in neither case is he saying that blacks or Irish people are bad. Which is what racism and anti-Irishism is, don’t forget. Not just using words neutrally.

To be honest, those parts of the book in dialect, including the Black church scene and the two Irish poems, really bog the reading down as you have to try to sound out the phonetically spelled words. But, again, this was written not so much as a “lecture” but as a performance piece that had to fill an hour or so in a tent on a hot summer evening.

So it’s an interesting piece as much for what it is as what it says.