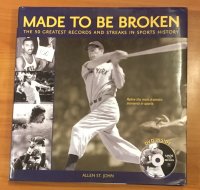 Well, I got this book from ABC Books this week, and I was so achy for sports that I jumped right into it.

I remember most the baseball and football ones from real life even though I might not have lived in their times just because they’re the legends of the game even though they weren’t Brewers, Cardinals, or Packers.

Some of the records have been broken since the book was published (Mark Spitz’s gold medals in an Olympics, Dan Marino’s career passing yardage–twice) and one has been stripped (Lance Armstrong’s Tour de France wins). So not all of them will last the ages.

An interesting and quick browse between heavier works, and a pleasant interlude.