So I didn’t run a 5K yesterday.

Still, on Friday night, we went to pick up the packets and shirts anyway. 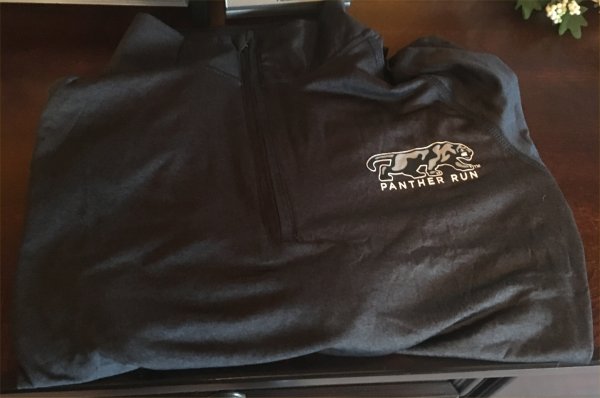 As we picked them up, several volunteers thanked us for coming to run with them, and I murmured a response that was not untruthful. Then, as I was leaving, my triathlon coach, who also works with the timing company for the event, asked if we all were going to run it, and I admitted to him that I was a fraud. I wasn’t going to run it, but I was going to pick up the shirts.

But I won’t wear mine. Although the Panther Run provides nice long sleeved shirts with moisture-wicking fabric and although my t-shirt wardrobe is about 60% 5Ks and triathlons (and only 20% Green Bay Packers), I won’t wear a 5K shirt if I haven’t actually run the race.

It’s happened before. Last year, we picked up our packets for the Sole Purpose Run on Friday evening, and our youngest took violently ill all Friday night, so none of us were in any shape to be awake much less run a race at 7am. So my shirt went into the donation pile immediately.

Other times, we have signed up for 5Ks but not run them. We signed up for one in Joplin in January the year before last, but race time temperatures were in the single digits. Another time, an ice storm might have made it too slick, so we stayed home, only to discover from the event pictures that the course was pretty clear (and the ice storm kept a lot of runners away, so I might well have medalled with my normal 3.1 mile time).

At any rate, the cross country season is over, and I’m hoping we can sign up for one or two 5Ks yet this year. I’m hoping I can get to the gym a little better early in the mornings and rebuild some running endurance so I can make a good show of it. And to start preparing for next year’s triathlons which could very well begin in February.