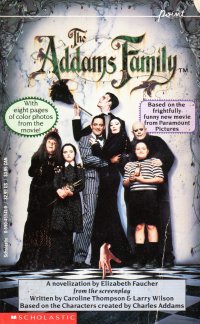 I guess a new animated film of The Addams Family is coming out. Now that I’m watching football, baseball, and hockey on the television, I see more advertisements these days. And, apparently, my youngest son saw an episode of the television show in school last week, for some reason, and he asked me if I’d seen it. I had, but The Munsters played more in syndication in Milwaukee, so I’ve seen more of them.

This book is a novelization of the 1991 (!) film adaptation that starred Raul Julia, Anjelica Huston, Christopher Lloyd, and Christina Ricci. You know, I’ve seen both this film and its 1993 sequel, and although I remember the basics of the plots, I don’t remember the movies that clearly. So I can’t compare the book to its cinema execution.

But the plot is that the wacky macabre Addams family still yearns for missing Uncle Fester, who disappeared a long time ago. When the Addams family attorney falls behind on payments to a loan shark and con artist and her son, they hatch a plan to insert the son into the family as the long-lost uncle until such time as he can steal the family’s wealth from their hidden vault. Only it turns out that the son fits in too well with the family and might be the real Fester.

This, too, is a kid’s book (as was Lassie Come-Home published by Scholastic, so clearly, I am really trying to pad my annual book reading total.

Actually, what happened was I was looking for a particular book on one particular shelf, and I found a couple of quick reads while I continue my search for this particular book. And, as I mentioned, my son brought up The Addams Family recently, which made it seem a timely choice.