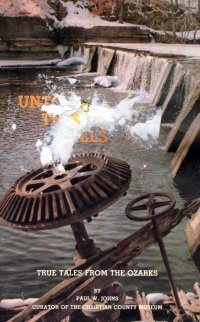 This book is a short collection of historical musings written by the curator of the Christian County Historical Museum in 1980. As such, it focuses on Christian County, especially Nixa and Ozark, although the abandoned town of Riverdale punches above its weight in these pages as the town had a couple of mills and spawned Ma Barker and her boys.

At any rate, some of it might be more folklore than real history. For example, the book says that Knoxville, Tennessee, was once called Nokesville and that the family it was named after ended up here (I live just south of Nokes Lane on property once owned by a Nokes). It talks about some of the pioneering families, but neither of the names in my family appear in the book–for good or for ill.

A pleasant read and a couple of interesting stories to relate to other people who can then wonder where I learned these things.

About the damage on the cover: When I got the book, it had a 1982 Mizzou Tigers schedule grafted onto it, and I found the cover tearing a bit as I tried to remove it. So I tried to steam it off with the intention of maybe framing the schedule and giving it to my mother-in-law for Christmas. But, as you can see, it was a bust.