As we live in the country, you might not be surprised when the random bull shows up at Nogglestead.

But sometimes, I have to explain. 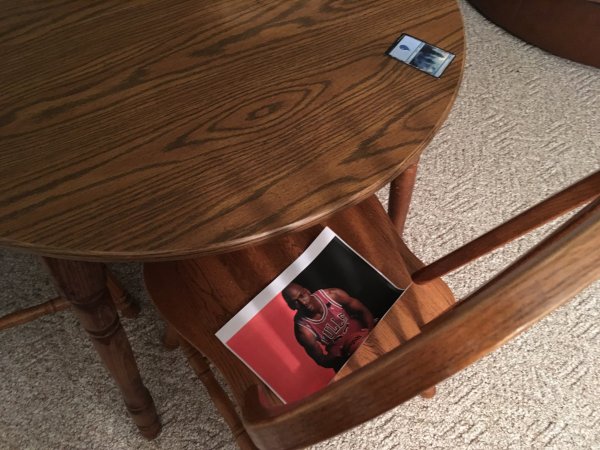 My children have been home this summer instead of going to various camps to occupy them whilst their parents work (working from home can be especially challenging during the summer time). They’ve had a lot of time playing video games, and apparently all the video games these days have integrated audio with them, so my youngest has spent a lot of time saying loudly, “Do you have a mike?”

When they had a friend over one Sunday afternoon, they all spent time playing individual games on their individual devices instead of playing with their friend. So I printed out a picture of Michael Jordan and waited until my youngest was playing on a gaming system that did not have a microphone.

“No,” he said. At eleven, he knows the proper inflection for how can you even ask that?

“Here,” I handed him the color picture.

It’s floated around our lower level since. Being it’s a color print out, nobody wants to dispose of it willy-nilly, without enough time elapsing and reflection.

You know I had children specifically so I could make Dad jokes, ainna?