About last year this time (well, early March), I did an indoor triathlon, and the toxic masculinity and toxic femininty that drives, if not toxic, well, then frankly insane people to participate, (and, frankly, people not, good with commas in complicated sentences) (where was I? Oh, yes, about to comma), leads me to thump my chest and proclaim how masculine I am, or not, based on what I did that day (or, weekend).

So, let us recap:

So I’d like to say I’ve had a good, masculine, fulfilling weekend. How about you?

UPDATE: My beautiful wife informs me that I have not done anything so masculine this weekend so as that she would wear anything I would make out of those scraps.

But there is next weekend, I think to myself.

This book reminds me a lot of Webster Groves by Clarissa Start, and well it should. Both are local histories compiled in the 1970s as part of the localities’ celebration of anniversaries. However, this book is a little less meaty than that one.

It has a couple of paragraphs around different topics such as sports teams, the car, airports, radio, television, and so on amid numerous black and white photographs. In addition, the book is chock full of sponsored pages, advertorials or paid content where a business had its copywriters or corporate historian chuck out a brief history of the business. You know, that was a thing in the middle part of the last century: The corporate historian, someone with an English degree or something that worked on keeping writing about the history of the company. This was proffered as a career option even when I was a kid for writers, but that’s all gone now, ainna?

At any rate, I was not a resident of the area at the time, so many of the brands and buildings they talk about within this book are gone now, although I did fly on Ozark Airlines and Trans World Airlines when I was a kid, before the bigger ate the littler and then got eaten by a bigger. But most of the local things mentioned in the book are gone, too, especially amongst the sponsored pages, so that probably explains why the Webster Groves book seemed more immediate to me when I read it–because it balanced historical places more than this volume, which focuses on abstract topic centers and businesses that have faded away.

At any rate, worth a buck, maybe, for the pictures. But don’t plan to browse it during football games and then wander away from the game.

I have on occasion accused my children of ululating when I meant to say they were undulating on the floor.

Although, in my defense, often when they undulated on the floor in displeasure they also ululated. 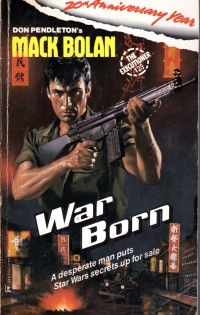 You know, this is actually a pretty good book. And not just a good book for a Bolan book.

So we’ve got Bolan a bit in the dark about what’s going on, we’ve got a small mercenary group led by the uncle who don’t know the score, and we’ve got the Vietnamese criminals and corrupt military officials all heading for a reckoning.

The jump scenes between the different groups and the individual interplay between the players work better than in typical Bolan novels, and it all moves the story along pretty well. A couple of things disappoint–a bit of clumsiness in the action sequences, and the whole “we have to airdrop into Vietnam and hump through the jungle to Ho Chi Minh City” instead of catching a plane with a fake British passport–but overall, it’s a pretty good little book. Well, less little than they used to be–they’re up to 250 pages by the 20th anniversary.

It’s books like this that keep me optimistic that my march through the dozens of books in this and related lines I have on top my to-read shelves won’t all make me cringe. I’d hope that most of them would be this good, but I am a realist who has a long track record already with these books. They’re not the same without Don Pendleton writing them, and many, many of them are not very good.

LinkedIn thinks, based on my profile, that rapper Triple Nitti and I might know each other. 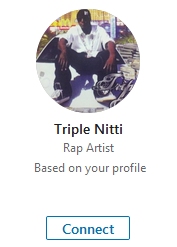 Well, as a software tester, I, too, often tell uncomfortable truth to power using rhyme and vulgar language. So we’ve got that going for us.

I mentioned that I had a stack of books on the side table of my sofa that I browse during football games and that some of the books, especially the ones with high text-to-pictures ratios tends to fall to the bottom of the stack and remain on the side table for years. Furthermore, I mentioned that I made it a mission this year to go through the stack and read those books to clear them away.

Well, I moved them to another book accumulation point, the side table beside the reading chair.

But yesterday, in light of the Super Bowl, I went through the stacks and selected a couple of books from my to-read shelves (not from the books that had hibernated on the sofa side table for years, as those books were clearly not fit for browsing during a football game): 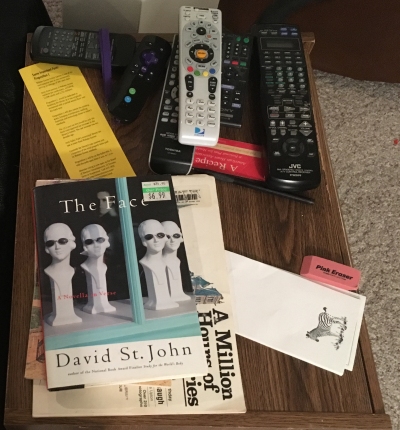 Some of these had, in fact, resided on the sofa side table in years past. But I did not expect to be that involved in watching the Super Bowl itself, so I thought I could read more text-heavy tomes during the game.

And then I didn’t actually watch much of the Super Bowl.

Gentle reader, that is how these things get started. There’s no telling now how long the books will remain on the sofa side table, unread. But, with history as a guide, it could be years.

Well, no. I have already cleared them to the reading side table where I shall browse them relatively quickly. Or perhaps leave them for years. Those very years will tell.

I really enjoy the samba beat in this single, “You or Me”, from Janet Evra’s new album, Ask Her To Dance.

Although I’m only guessing samba; although it was briefly covered in Elements of Jazz: From Cakewalks to Fusion, I’ve already begun to forget what I might have learned from the course.

Janet Evra is also from the Saint Louis area (which explains why I saw her mentioned on WSIE’s Facebook page). I expect to get her new album when I feel comfortable just ordering new CDs on a whim again. Or for my upcoming birthday, since I spelled ‘Janet Evra‘ to my beautiful wife. Although I guess I did spell my last name to my beautiful wife at some point before I made her practice writing it over and over. 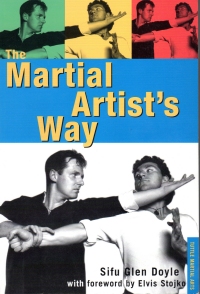 It’s been almost a day since a small business owner came around the counter and put me in a martial arts hold, but we’ll come to that by an by.

I bought this book in December at the same time I bought Taekwondo Kyorugi. I don’t consider myself a martial artist, but here I am reading about martial arts whilst training in martial arts.

This book is a very high level overview of martial arts and training in them; although the author is a teacher of kung fu, he does not focus on that style. Instead, he talks at a high level about thinking about studying martial arts, choosing a style that’s right for you, choosing a school, getting your mind right, training, fighting on the street, competition sparring, and other things. But all of it is at a very high level.

Although the book said it should include things that appeal and apply to someone who is already taking martial arts, nothing in it inspired me or provided me with any new insight. I agreed with some things, but probably disagreed with more than I agreed with (because my school is a blended style and recommends practicing at home, both of which are tut-tutted in this book). Much of the content is abstract to the level of pablum. I actually got more ideas from Taekwondo Kyorugi.

And I could not for the life of me figure out what the man was doing to that nice young figure skater on the cover: 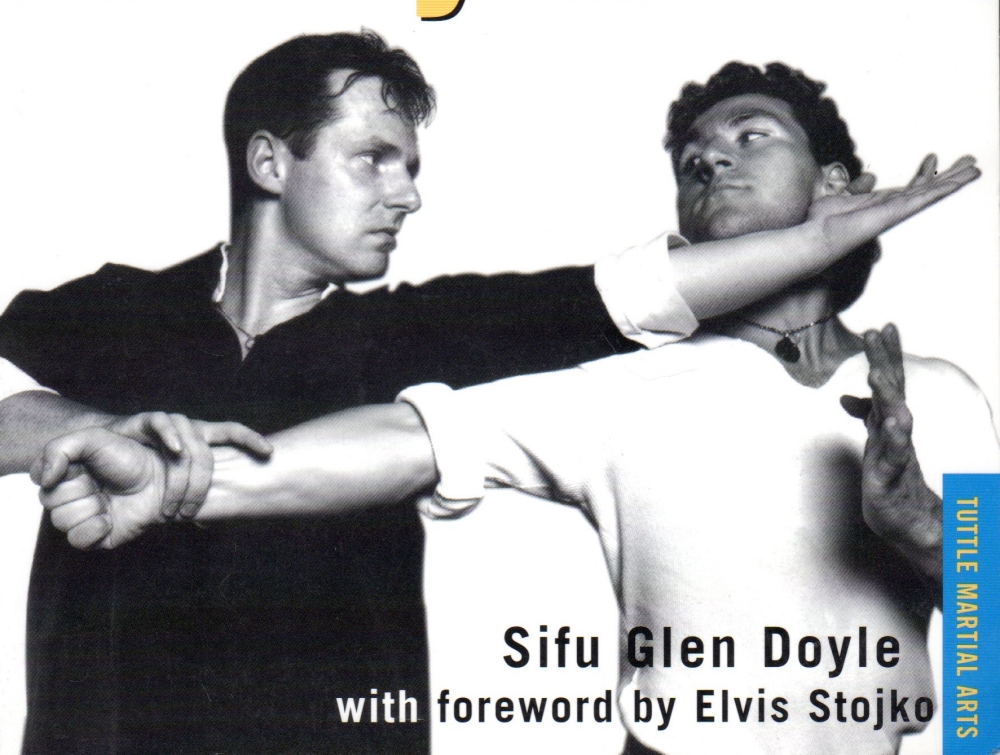 From the clenched fist, I thought it was some sort of punch defense and counter, although the open hand of the riposte with the thumb toward the ear. Which doesn’t make much sense. So I asked my kyoshi.

“It’s a kung fu arm bar,” he said, and he came out from behind the front desk of the martial arts school to put me into it. It’s not a punch defense at all, but rather a counter when someone grabs you and you want to immobilize them. The sifu is actually pressing the attackers elbow with his body and has his forearm against Elvis Stojko’s neck and is pressing back and up. Which makes a little more sense than a block and a counter strike. I don’t know if it makes for a compelling martial arts cover, but I guess the other photos were not as good.

At any rate, I finished the book. It might be helpful if you’re thinking about trying martial arts and don’t have kids in a program somewhere that also sucks in the parents like our school does. But the book reads more like a vanity project designed to elevate the author’s brand as a martial arts/fitness consultant to celebrities and sports figures in Canada around the turn of the century.