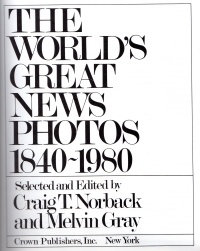 Well, those boys have done it to me again. Like Ron Burgandy finding a question mark on his teleprompter, if I find a book on the table beside the sofa, I must read it. Even if I have already read it. In this case, I read this book in 2011. The boys, you may remember, also did this when they shuffled You Can Tell You’re A Midwesterner When… into this same stack.

At any rate, the book hasn’t changed at all: It’s a collection of noteworthy news photos from the very first deguerreotype taken in Paris in 1839 to the highlights of the Carter administration. Many of the images will be familiar, as their iconic images that have generally swayed public opinion in the leftward direction.

This time through, though, perhaps because I now have little adhesive tabs for flagging things in books (I don’t write or highlight in books, much to the disappointment of my college professors who thought it important that I “dialog with the text” by writing in books that I would no longer be able to sell back to the college bookstore or to shelve and never review again unless my kids got it out and put it on my side table), I have highlit some things that are just wrong in the captions:

When I read trivia books and run across a fact that I know is not true (often planted by the authors/publishers to spot people who use the questions in violation of copyright), I have to doubt everything I read in the book that I don’t already know.

Even in a collection of “news” photos published in 1980, I have to do the same.