So yesterday morning, I needed to stop by the Ozark Treasures antique mall to pick up some jams and jellies for Christmas gifts (new ones, not antique ones–I hope). I also found a booth that had LPs for a dollar each, which explains why I took a flyer on this album:

The band is Saint Tropez. The album (five songs, so more of an EP), is Je T’aime. Here at Nogglestead, we were talking French the other night, and I tried out the French I know, including “Je t’aime” and “je t’adore,” which, coupled with “Parlez-vous français, “Après moi le déluge,” and the contents of Billy Joel’s “C’etait Toi” are all I know of the language (and I pronounce none of them right). So this looked like a good pickup for a dollar. 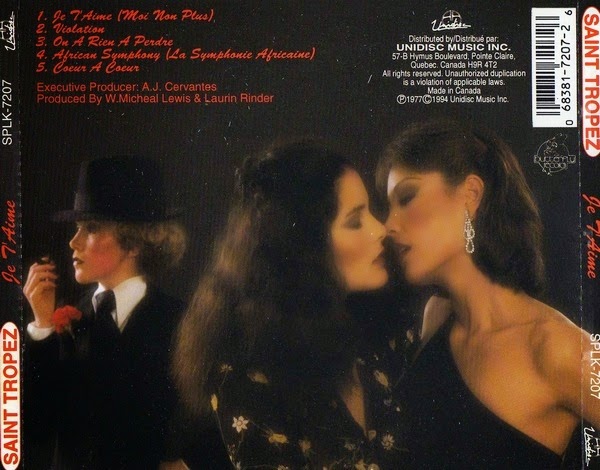 According to Discogs, there’s a story running through the group’s three studio albums about a woman who falls for another woman wanted by the Paris police and Interpol. The story was supposed to conclude on the fourth album, but that one never materialized.

Well, that’s curious, Brian J. But how does it sound?

The title track is a little breathy and moany:

But the other four tracks are more straightforward disco-y.

Which is weird. Suddenly, I’m buying disco records because I relate to them as easy listening from the 1970s.

Given that the other Saint Tropez records are mostly in English, this quite well might be the only French language disco record with a lesbian intrigue subplot that I ever hear. Unlike the best disco flute record I’ve ever heard, whose artist released other similar records (which are good, too, but not the best).

What other records did you get, Brian J.? you probably aren’t asking. Well, I got George Benson’s Give Me The Night, Vikki Carr’s For Once In My Life, Lou Rawls Come On In, Mister Blues, and Dionne Warwick’s Heartbreaker.

If anything, you’re asking What booth still has $1 R&B records?, and I’m not going to tell you.