I traded my pickup truck in for a more family-friendly SUV. 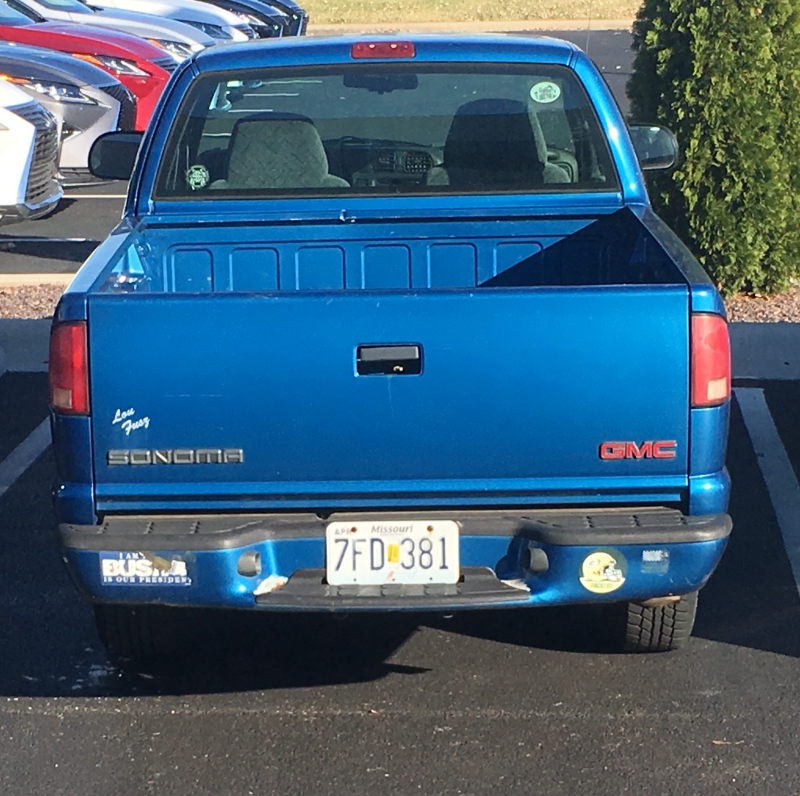 I bought that truck new in March of 2001. I wanted a pickup truck so that I could haul video games. I’d bought an upright Thunderblade off of eBay, and I hoped to pick up some other games at auction and maybe start a video game or vending route in my spare time, so I got a small, economical truck that could handle them. I did haul a couple back from auction, but I never did start a business around them.

I did, however, eventually learn that it was not a half ton pickup truck. Not the hard way, fortunately, but someone told me and set me straight. It could still handle over a half ton of soil and landscaping material as I built the famed gardens of Old Trees and Nogglestead. Without destroying the suspension.

I didn’t put a lot of miles on it. I started working from home not too long after I got it, and it was not arrayed to ferry children. It had a jump seat in the back, and it’s only since my boys have outgrown their car seats that I could drive them around in it. They were very excited to ride in Dad’s truck, briefly. Unfortunately, often when they rode in it, we had to accommodate two boys, two backpacks, one or more brass instruments, and/or three or four gym bags full of martial arts uniforms and equipment. Suddenly, it was not an effective conveyance.

I can’t help remember the people who’ve ridden in that truck. My friends Doug and Brian from Wisconsin visited the week after September 11, 2001, and were among the first to ride in the back. I spent a Saturday going to yard sales with my Aunt Dale before she passed, and she thought my plan to have a vending machine route showed I had “hussle.” My sainted mother fit into the back seat once or twice before she passed away and rode in the front seat other times.

Look at those bumper stickers: A “I’m Proud Bush Is Our President” sticker I thought of removing once or twice and might have tried. A Packers sticker. A foil-backed flag sticker that faded to nothing but the foil. The RIC decal. A Webster Groves Historical Society member sticker (a membership that I have kept current whenever they have bothered to send me a renewal). Little reminders of who I’ve been for almost two decades.

It was starting to show its age. Well, it was starting to accumulate little things that I didn’t bother to fix. The rear window clasp on the passenger side had been broken for a long time–I held the window shut with duct tape. The third door opener was broken, so anyone getting into the back had to climb between the front seats. The CD player didn’t play–although it had quit on me for a while once before and healed itself. The air conditioner failed on it last summer or the summer before, but I don’t need air conditioning unless my beautiful wife rides with me–I even had told the car dealership when I bought the car that I didn’t need it, and I wanted to pay less for a truck without it. But the dealership would have had to order one from a lot in Alabama to get me a truck with no air conditioning, so I ended up with the amenity. The bed of the truck was starting to get a bit rusty, and the paint on the walls of the bed was getting scratched up. A little was due to the time I scraped a Love Tester machine when putting it into the bed after an auction, but most of it was because the boys started using it as a fort for Nerf wars.

My beautiful wife could not drive it; it has a manual transmission, and although she tried to learn a couple of times, she grew very frustrated with it. So when I had the boys in the family vehicle, she couldn’t go anywhere. So it really was probably past time to replace it.

I didn’t use the truck that much, but it certainly came in handy when I did need to haul something. Even now, I still think about picking up some lumber, and I think, no, or I fancy throwing my bike in the back to take it to the Wilson’s Creek National Battlefield for a ride, and I think, no.

The former family car is getting high in mileage, so we’ll replace it in the next year or so, probably with a full size pickup truck with a crew cab and automatic transition. But the odds are pretty good I won’t drive it for almost twenty years.