My kids asked me about the decal in the back of my pickup truck window.

As you might expect, my pickup truck’s rear graphicature represents the stereotypical country dweller in Southwest Missouri. I’ve got an old bumper sticker from around the turn of the century that says “I’m proud Bush is our President”. I’ve got an American flag so faded that you can’t tell it’s an American flag unless you’re really close. I’ve got the logo of a professional football team–the Green Bay Packers, the only team that matters and not the Kansas City Chiefs, the closest team to this corner of the state and therefore the preferred one for most of the locals.

Things go a bit awry with the Webster Groves Historical Society decal, as I’m no longer in Old Trees itself (but I maintained memberships in the historical society and the friends of the library until they stopped sending me things because I moved away).

No, the boys were asking about the Reason – Individual Rights – Capitalism decal: 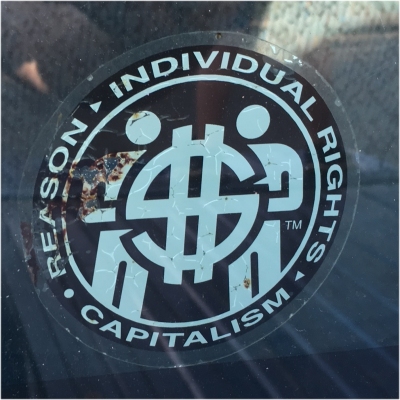 It’s a little worse for wear, but it has been on the truck for longer than the Bush bumper sticker. I most likely put the decal on right away, as I have affixed a similar decal in every car I’ve owned.

The decal came from an Objectivist-themed outfit called RIC Trading. Back in the last century, I was a big-O Objectivist. I read a lot of Ayn Rand in college, of course, and I even read Objectivism: The Philosophy of Ayn Rand by Leonard Peikoff. I subscribed to a magazine called The Intellectual Activist (which employed a much younger Robert Tracinski, if I am not mistaken). The magazine turned me down when I offered to write for it, but to be honest and as reasoning writers of today will tell you, I’m a little lightweight for serious philosophical diatribes. I think I saw an ad for RIC Trading in the back of the magazine, though, and I got one for my first car, a Nissan Pulsar.

Well, I bought my cars cheap and high mileage in those days, and I put ten or fifteen thousand miles a year on them, so I turned them over pretty quick. When I couldn’t find RIC Trading around for another order, I bought a bunch of them on eBay (and got a free lapel pin to boot).

As I have aged, my cars’ prices have gone up, but they’ve lasted longer as demonstrated by the current pickup truck that I’ve been driving for sixteen years and change.

But never fear: When I get my next car, I’ll have a RIC decal for it. As I’ve got a couple left, I might have enough to cover all the cars I’ll ever own. 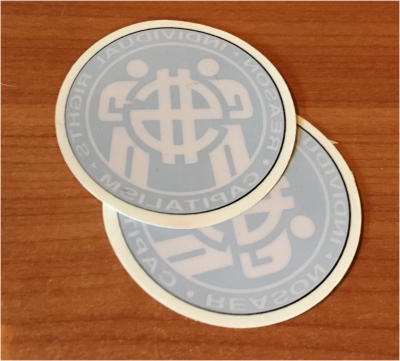 I explained what each meant for my children. Although I’m no longer a capital O Objectivist (I don’t recognize the infallibility of Ayn Rand), I still believe in Reason, Individual Rights, and Capitalism.