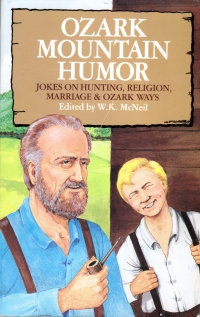 With a title like Ozark Mountain Humor and a subtitle of Jokes on Hunting, Religion, Marriage & Ozark Ways, you might think that this is a humor or joke book. As I did. But, ah, my foes, and, ah, my friends, it is an academic study of jokes as folklore.

Which means that half of the book is end notes describing where the joke was “collected” (via field work, where intense academic types transcribed jokes). Each joke is numbered for easy reference, and each joke is called a “text” when described in the end notes. Motifs, numbered academically according to one or more humor motif codexes, are cross-referenced, and some of the jokes are delineated from humor manuscripts in 15th century Renaissance Italy or old English joke books printed immediately after the Gutenberg Bible.

And one or two of the jokes are funny.

But reading an academic book about jokes that includes jokes adds a bit of remove from the actual jokes, so perhaps I was less prepared to laugh. Also, I don’t tend to laugh at many jokes in these books, and I’m infrequently actually amused.

Here are the notes that I flagged in the book as I was reading:

I didn’t flag the footnote that jokes about black people were removed at the publisher’s request. The jokes about nuns enjoying being raped, however, remained in the book. In 1989, our official sensibilities were only starting to be refined. Although one of the nuns being raped jokes relied on the inclusion of a black nun who speaks with a hyperbolic accent and who already knows a thing or two about sex. One wonders if this text was excised in later editions of the book.

Also, the author refers numerous times to Asimov’s Treasury of Humor (which I don’t think I own, but I will be on the lookout for), but never refers to Lecherous Limericks. Limericks are not part of the native Ozarks oral tradition, apparently.

At any rate: I read it, and it counts as my 75th book of the year. I even read the End Notes, or skimmed them, anyway, as some of them detailed the local people who told the joke, including many people who were born in the 19th century and saw the early 20th century changes to their corner of America.