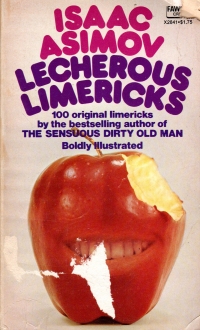 My son had a poetry assignment for his seventh grade language arts class, and part of that assignment was to write poems in a variety of styles, including a limerick. Which seems odd to me, gentle reader, as the limerick as properly understood, is a bit off-color in its humor most of the time. In a show of solidarity and to inspire the boy to write the poems, my beautiful wife said that she and I would also write poems, so I scratched out some lines of a clean limerick that isn’t very good. And isn’t very done yet.

But the exercise reminded me of this book, and I remembered its approximate location, so I thought I might browse it while watching football. But it is, erm, “Boldly Illustrated,” and a quick glance at it indicated that I should not read this where my children might see it. For although by the time I was his age, I had illicitly commandeered my mother’s copy of the Frank O. Pinion Dirty Joke book and memorized enough of them to be slightly less unpopular at North Jefferson Middle School. But I’m not sure how much off color humor I want to introduce to my son and, by extension, his Christian school. So I read this book under the blankets in the dark, and I’ll make sure it’s hidden on my bookshelves again where he won’t casually find it.

So. The book is 100 off color limericks by Isaac Asimov. They’re clever for their form, but what makes the book is that Asimov talks about the form in the beginning, and with each limerick he writes a couple of sentences to a couple paragraphs that explain what he thinks of them, how his wife might have helped with it, the circumstances in which he wrote it, and other asides from the mind of Asimov. A book of 100 limericks by Asimov would be less than 200 pages of Asimov talking about his limericks.

So I enjoyed it.

A couple things of note:

A good read for an adult fan of Asimov. Unfortunately, these days, is there any other kind?