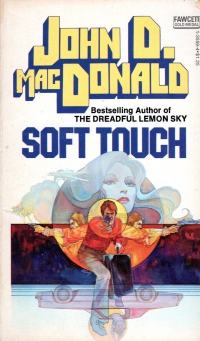 One of the joys of John D. MacDonald books is that you’re not really sure what you’re going to get, even by the cover. He writes books about business shenanigans and land deals gone bad, he writes crime books, and sometimes he just writes character studies where the characters deal with disasters. Sometimes, like this book, he creates a sympathetic character who makes bad decisions and more bad decisions, and suddenly he’s a bad guy (as also happened to a lesser degree in Clemmie).

In this book, the main character is a former World War II special forces sort who, twenty years later, is a construction project manager. He started his own company, but fell in love with the daughter of a larger construction company’s owner and has married her. Their childless marriage has descended into that alcohol-soaked suburban immorality and adultery that one finds in MacDonald books sometimes. One of his war buddies comes in from South America with a plan to relieve a courier of several million dollars for an arms purchase just as an attempted coup is thwarted, and with the coup plotter dead or in prison, nobody will care about the money. They devise a plan just like in the old days, and it goes off without a hitch–well, except the friend gets wounded and has to hole up at the main character’s house and dallies a bit with the missus.

Well, it is a good read even as the sympathetic character descends out of that sympathy. The end, though, is pretty abrupt, as forces from the government and from South America that were looking for the money show up and set the stage for a bloody climax and then a less bloody anti-climax.

Still, it’s good writing for the most part and reinforces my belief that John D. MacDonald is one of the best writers from the 20th century.