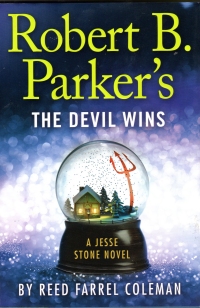 Well, well, well. This was a pleasant surprise. I was not pleased with Blind Spot, the first Jesse Stone book that Coleman took on after the Brandman Dynasty. I knocked it for its slow pacing, for its early revelation of the bad guys, and some thick prose of the sake of thick prose.

With this book, though, Coleman seems to find his footing. In it, the collapse of an industrial building in a winter nor’easter uncovers the bodies of two teen girls killed twenty-five years ago, and Stone has to uncover the unlikely group of killers. Paradise thinks this is its deep, dark shame from the past, and it threatens to hidden secrets from people Jesse has known for a long time. In series business, Jesse is still dealing with the aftermath of Suitcase Simpson’s shooting in the last book, starts visiting the shrink again, and meets the new ME who will become his friend and maybe more. The series business doesn’t overwhelm the story of this book, though.

So, overall, not bad, although the whole “in the deep past of 25 years ago” might ring a little truer if the first Jesse Stone novel hadn’t come out in 1997, 21 years ago. Also, deep, dark past doesn’t work for me since I can remember being an adult(ish) back then.

But good enough that I’ll look for other entries in this line at book sales.