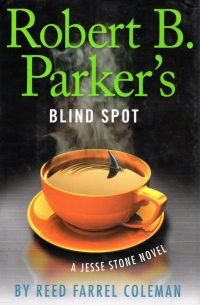 This book is the first of the Jesse Stone novels written by the new guy. So we’ve got a little whiplash to account for, as the series jerks back from the television writing to long paragraphs and entire chapters composed of tiny bits of plot development and a whole lot of “nice little moments” that take individual characters within the storyline and give them their time in the sun. And the night. And the light of dawn. And the grey of twilight.

I was going to digress a bit on describing the plot, but let me stay on general lamentation for the structure of the book for a moment: We’ve got dozens of chapters of each major player in the book getting his or her say in what’s going on, which builds some depth and maybe richness to the plot, but at the expense of the plot and a sense of movement. Pacing. This is supposed to be a suspense novel, but not a mystery: we know early on who has done it and what they’ve done, sort of. What we’re supposed to be in suspense for is the ultimate resolution. So I slog through hundreds of pages, and then we get a resolution triggered not by detection but the potentially uncharacteristic confession of a minor character (who gets his chapters, brah) that leads not to a complete resolution, but one of the Parkeriana solutions: A meeting with a bad guy arranged by a bad guy but accepted because they all agree Stone is a man of his word, a brush with danger, and a cliffhanger ending that might lead into the next book or it might not.

Sadly, with what I’ve been reading this year and what I’ve seen in this series, the Parker legacy is a set of series that are destined to be nothing better than fat, wordy men’s adventure novels. Whipsawed between authors seeking to put their stamps on the books, readers get continuity flux, differing styles, and characters who are similar to those who come before in name only.

Seriously, in this book, we get the following changes:

The plot revolves around a former teammate of Jesse’s, a second baseman who made the big leagues after stealing Jesse’s girlfriend and who is rumored to have intentionally caused the play that ruined Stone’s big league career. After baseball, the fellow got into investments and after the markets fell in 2008, he turned to the mob to help finance a pyramid scheme. He throws together a reunion of his minor league team to get to talk to Jesse to see if Jesse can get him out from under, but before he does, his mob associates kidnap the son of their next target to apply pressure to the reluctant father, and they kill a girl in the process. So the ball player doesn’t get to talk to Jesse before the murder and can’t after the murder. An FBI agent has gone undercover on her own to get the goods on the ballplayer. And the father of the kidnapped boy has put out a hit on the ball player. So we have 300 pages of slow motion resolution that gets wrapped up unsatisfyingly at the end.

I don’t know. Maybe I’m getting older and cynical, but I’m not really enjoying modern suspense fiction as much as I did when the modern was late twentieth century and I was younger. But I have to wonder if I’m going to give up on the Parker properties much like I’ve given up on the Sandford series these days.