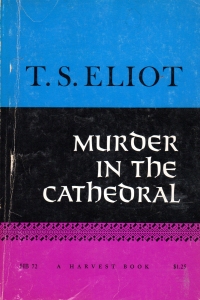 Well, after reading What If?, I did not pick up the next Executioner novel. Instead, I picked up this play that I bought at the very end of last year.

It’s a single evening play in two acts by Thomas Stearns Eliot, the man most known in these parts for “The Love Song of J. Alfred Prufrock” (which I could recite and perform from memory in my Open Mic days). The play deals, as the title clearly indicates to anyone with a classical education, and oh, my God, that’s not many of us any more, is it?, the death of Thomas Becket at the purported “request” of King Henry II of England. Becket, who had been the king’s chancellor (tax collector in chief) before he became archbishop of Cantebury, opposed the king after he became archbishop.

The first act of the play covers Becket’s return from exile to Cantebury, where his mere presence lifts the spirits of the downtrodden and the clergy, but Becket predicts his own martyrdom and is presented with various temptations: sensual pleasure, power, and finally, immortality in his martyrdom. While he resists easily the first and earthly ones, the last of them tracks with his secret desire. Then, in the second, when the knights are coming, Thomas does not flee and insists upon opening the doors to those who would kill him. After they do, the knights present their cases as to who really was at fault in his death.

So I guess you’re supposed to wonder and talk about later whether Becket was doing God’s will or his own in the second act given the nature of his last temptation. But I’m a bit meh on it.

The play is mostly in verse, some rhyming and adhering to standard rhythm and some not. However, the knights present their cases in prose. So clearly this is Drama, which means you go to the play to be educated and not entertained with a side of emotional response and later musing on the big themes that entertained you while playing out.

So I liked it less than The Marriage of Bette and Boo. Or even The Oedipus Cycle or The Bird by Aristophanes because they’re old books translated from dead languages. This play is more akin to The Balcony by Jean Genet in that it’s Educational, but I forgive the Genet play more because it was in French, and Eliot wrote in English, following a rich tradition of playwrights who wrote plays enjoyable for themselves and not the IDEAS they PRESENT.

Also, I did flag two bits of text worth something amid the rest of the versage:

What peace can be found to grow between the hammer and the anvil?

You shall forget these things, toiling in the household,
You shall remember them, droning by the fire,
When age and forgetfulness sweeten memory
Only like a dream that has often been told
And often been changed in the telling. They will seem unreal.
Human kind cannot bear very much reality.

So it’s got that going for it.