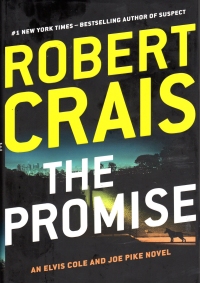 This book has been on my to-read shelf for a while, and I don’t know why. I enjoy Robert Crais’ books more than a lot of the stuff I read. How big of a fan am I? I once spent an afternoon going through microfiche old PDFs of Spider-Man comic books to find the one with the letter from little Bobby Crais in it. I should probably jump right on new Crais books when they become available, like I used to with Robert B. Parker books, but my winding path through my library doesn’t often make sense.

Although billed as an Elvis Cole and Joe Pike novel, the book also features the dog handler from Suspect (and given explosives are involved, one would expect an appearance by the protagonist of Demolition Angel to make an appearance). I’m sure one could muse at length about the reasons that authors bring their series characters together with each other or their one-offs (see also Robert B. Parker). Is it because the fans want to see them together? Because authors love the characters and want to see them again? Because authors are lazy? Probably not the last in all cases, but one never knows, and one who writes this blog goes off into long enough digressions in these book reports without a lengthier musing on this topic at this time.

Cole takes a case from a corporate executive whose employee has gone missing along with several hundred thousand dollars of money and a large amount of untraceable plastic explosive. Apparently, she’s using it to try to find the terrorist organizations that blew up her son in Africa. As Cole investigates, he stumbles upon a fugitive on the run to the safe house where the woman, her handler, and their customer are planning a transaction, and Cole falls under suspicion for being involved. The big baddy targets the K9 officer who saw him there, and a twisty plot unravels over the course of the book.

Crais jumps between points-of-view throughout the book (which is the narrative style, ainna?), and the plot does come out as Cole investigates. He discovers that his client is not who she claims to be and that someone in the government might be involved. Although this is the prime way to set up a sucker punch, it’s not–the government isn’t arming the terrorists or anything like that (uh, spoiler alert). The end comes pretty quickly, and some of the resolution is just tacked on a bit at the end without needing the flow (that is, the tacked-on bit could have happened anywhere in the story or ten years later).

Still, a fun read from start to finish. Paced well (jumping points of view probably helps that), and it makes me want to go out and catch up on the series. Which might mean nothing more than searching my to-read shelves to find any other Crais books that might lurk there.