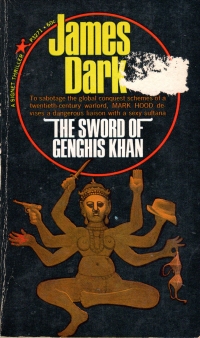 If you only read one Australian spy thriller featuring a Mongolian mad scientist’s plot to take over the world with a metal-melting satellite, this should be it! Of course, I’m not sure where you would be if you wanted to read two such books, as this probably is the only one. But it’s a series book, so you could easily find other things like it to read.

Well, I’ve pretty much given it all away here: Mark Hood, an operative for a trans-national spy agency (which operates freely in the Soviet Union as well as the West because all parties agree to give this group, Intertrust, the ability to ferret out nuclear proliferation concerns). In this book, a strange phenomenon–weapon?–destroys a Japanese fishing fleet and damages a U.S. destroyer, drawing the attention of Intertrust and its dashing hero. Additionally, scientists are disappearing–being kidnapped?–, and hero travels to the Soviet Union to protect a similar scientist only to find the scientist has been snatched away just before Hood and his associate arrive. The agency provides them cover to travel to China, and they discover the kidnapped scientist aboard a train with a beautiful young Asian woman who’s delivering the scientist to Mongolia and her father, a distant descendant of Genghis Khan, who has discovered the treasure of Khan and used it to finance a solar-lensing satellite that can target anywhere on the planet with a heat ray.

The book is written in a British style. The prose is polished and the story moves along, but it’s a little dry and at a distance. So it’s not that thrilling. The plot, though–outlandish. Somehow the combination of the outlandish plot with the sedate language doesn’t work for me. But it is definitely the best Australian spy thriller I’ll read this year.

(For a review on the first book in the series, Come Die with Me