Friends, it’s been six years since I replaced my cover with something I bought off of the Internet because most of America lacks a hat store. So although I was quite concerned about the parking meter situation, I agreed to go in to look for something to replace my hat with. It’s starting to pill in spots, especially on the top of the crown. My hats tend to wear out there, where I grab them and where they get set upside down to hold sunglasses or whatnot.

At any rate, although I tend to buy pants from the top of the stack at Walmart and don’t even try things on at the department store, I tend to be fussy in choosing a hat. I have to try on candidates multiple times and look at myself in the mirror with them from various angles.

I mean, I know what I want: Fedora, crushable/packable, C-crown, classic brim (not the little contemporary brim), a thin hat band. This time, I was hoping for a lined hat because I was feeling luxe. Which took us from the hats on hangers to the behind-the-counter selection. I tried on some of the nice hats, but so many of them were made from some very thin felt. Eventually, though, I didn’t find something that suited me quite right, and the concern over the parking meter situation won out, so I left without buying anything even though I was in a hat store, dude.

Still, when I held my current hat against other black fedoras, I learned exactly how much it had faded in near-daily wear for six years. So I immediately ordered the same hat I did previously on the Internet. 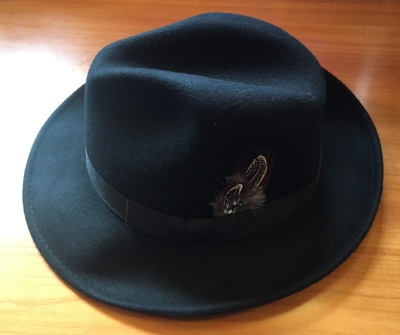 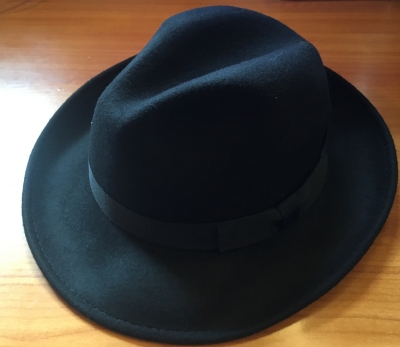 So I’m inventing reasons to leave the house so I can wear my new hat. Not that anyone would notice because it’s the same as my old hat, but darker and a bit stiffer. But I know.

Also, I don’t want to leave you in suspense with a cliffhanger: We got a ticket, but overstaying your meter in Traverse City is apparently only five dollars, which is not bad considering a city parking lot or garage runs more than that in a bigger city. But I could have tried on even more hats and wasted more of the saleswoman’s time.