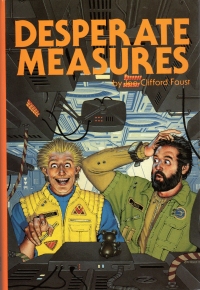 This book is by the author of A Death of Honor; although I didn’t like that book a lot, the author Googled himself and commented on my book report on his blog and had better things to say about my book report than I had about his book. So the author earned some respect from me, and I thought I’d give him another chance.

Which turns out to be a good thing.

Whereas A Death of Honor was similar to Casablanca, this book is similar to Firefly–except the book preceded the television series, so it’s more in line with the genre of the scrappy interstellar traders. But the protagonists often operate outside the law, and the book features a Chinese syndicate, so in 2016, that earns a Firefly comparison. Which will be a known reference point for a couple more years, anyway.

You have May, a captain of his own ship (but indebted to the aforementioned Chinese syndicate) whose co-pilot steals the ship–or takes the ship in lieu of back wages–after a barroom altercation leaves the captain laid up for a while. May makes a drunken deal with a commodities trader on the planet who sells him beef at a discount for transit. But his new untrained co-pilot only meant transit to the other side of the planet, not another planet. Also, the beef might not have been his to sell.

The book is a series of such incidents without much of an overarching story arc aside from the episodic events, much like Firefly was before they screwed it up wrapping everything up in Serenity. This book is the first in a set of three, and I’ll keep my eyes out for the others in the series and the others by the author.