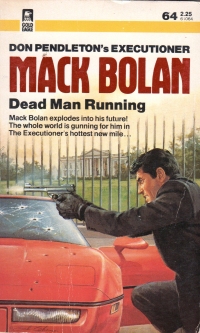 This book is another turning point in the continuing Mack Bolan saga.

The first thirty-some books dealt with Mack Bolan waging war on the mafia; the next thirty some up until about this book (#64) dealt with Bolan working under the government aegis as John Phoenix fighting terrorists. This book changes that.

I’ve missed a couple of books in the series. The last one I read was #59, Crude Kill. So I missed the actual death of April Rose, although I knew it was coming somewhere. This book deals with the aftermath, as Bolan hunts the people responsible for the attack on Stony Man Farm. He can’t trust his government contacts, and some of the government is ready to end his Phoenix project.

Bolan has also been framed for the assassination of a Russian, so he’s being hunted by American forces as well as the Russians. He finds a tie between the remnants of the Mafia and the KGB, so he goes on the warpath against both, exposing a high-level Soviet mole after a couple of ambushes and hitting a couple of hard sites. Then he casts off the government and his pardon with them to return to his one-man rampage against the KGB.

I enjoyed the book more than others, but that could be because I read it amongst other books instead of reading a bunch of them together, or it could be partly because it represents a shift in the story arc that promises some freshness to the continuing series. But just to be on the safe side, I’m not going to read a bunch of them in a row. It’s not like I would jump into the next one anyway; I read Cambodia Clash (#65) in 2010.