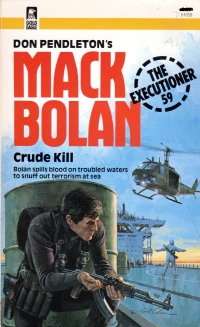 Terrorists have taken control of the new world’s largest nuclear-fueled super-duper tanker in the Mediterranean Sea and are holding it for ransom, threatening to blow the boat up and pollute the entire Mediterranean Sea and its beaches with hundreds of millions of gallons of oil. Mack Bolan is called in and reaches the boat via parasail, and then it’s infiltration and defeating an army of terrorists who want the nuclear fuel for atomic weapons as much as they want the ransom money.

Bolan finds some new skills in the book, including underwater operations. He orders a UDT (Underwater Demolition Team, the precursors of the SEALS) to stand down which brought these books into the most stark contrast to the Richard Marcinko’s Rogue Warrior tales, and the Bolan books suffer in comparison. But they’re quicker reads and entertainment enough for their paperback glory.

So I liked the book well enough to want to read another. Or perhaps a Marcinko.