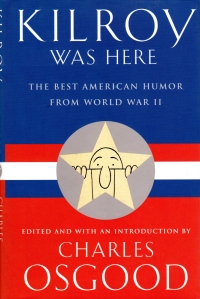 This book collects some humor from several World War II era sources, such as Stars and Stripes, a book called Yank, and a couple of other works. It’s grouped by topic, which allows Osgood, the editor, to shuffle material from the same sources. It includes jokes, poems, humorous anecdotes, and whatnot.

As such, it is more easily approachable, prolly, to people of a certain age who grew up with Beetle Bailey and Sad Sack cartoons or who actually served. It’s not a bad read, but it’s from a time before cell phones, Twitter, and the Internet, which probably means that kids today won’t get much of the humor.

So not a bad read, but probably not something that’s going to sell a bunch more these days.

The KC Kid saw me reading this book out in public and asked if he was going to read the review for it sometime. Well, yes, but it won’t be much of a review.