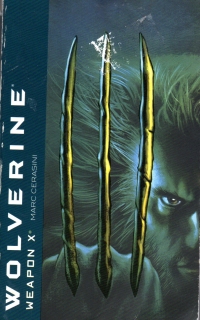 This book is a novelization of the Weapon X storyline from the Marvel Comics that tells the origin of Wolverine’s metal skeleton. I was most familiar with it because a spin of it was part of the material covered in the first Wolverine movie. But I’ve never been a real fan of the mutant titles, to be honest. Which is why we’re a couple or three behind in the film series as well.

At any rate: The book follows two tracks. One is Logan getting captured, which is told from his point of view until he’s rendered a test subject, at which point it becomes a story of the scientists working with him. It shifts to the point of view of some of the employees at the facility, including some almost sympathetic looks at the guards and scientists. Then it comes to the ending where, if you don’t know, gentle reader, let me tell you: Wolverine awakens and kills everyone, and the desperate fight is told in great detail, and the scientists–even the ones with the backstories that make them somewhat sympathetic–die! But, wait, there’s a twist: it’s an induced mental part of his conditioning and didn’t happen! But wait, there’s another twist: A scientist pipes up that this mental induction technique was no longer used because it was sometimes predictive of the future! Then Wolverine wakes up, and everyone is killed quickly.

Oh, yeah, the second part of the story is Logan as a special ops man going into North Korea to stop something or other, and Logan dreams the memory of it as he’s being experimented on, so that’s how it crosses over into the main plotline. One of the helicopter pilots at the end turns out to be one of the security team at the facility, and he recognizes Logan ultimately right before Logan kills him.

So I thought the ending of the story was mangled. The whole double-twist thing was stupid. And, unfortunately, the excellent work humanizing the scientists in the novelization made the ending unsatisfactory because I didn’t want them dead. Most of the book is from their point of view, as I said, so the culmination of a revenge story at the end doesn’t seem congruous. But that’s a problem of the story, not the novelization.

At any rate, Marvel did a couple books around this time of that ilk, but I’m leery of them. I’ve got some other comic book novelizations around here, and I’ll probably get to them sooner rather than later, but I’m disappointed in this story.