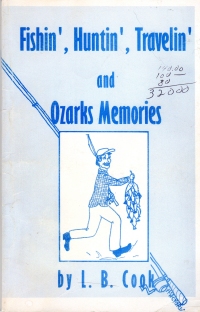 This book could have included Figurin’ in the title if only because someone did a quick calculation on the front of it. Clearly, someone did not think this was an heirloom quality book.

Since I’ve been reading 600- or 700-page books of late, I thought I’d take a little detour into this seventy-something book of local interest. Published at the end of the 20th century, it’s a collection of work of a local conservation-oriented fellow who previously had published a couple of the bits in newsletters and whatnot. As the actual title indicates, it’s a collection of two or three page recollections of trips taken over the course of decades by the author. Some of the shorter bits, particularly of trips to southern Texas, have the feel of a newspaper column and are the stronger of the writings in it. Advice as to how to find places to hunt in other states by mailing postmasters and conservation agents in the areas you’re interested in hasn’t held up. And some of the pieces are more like minutes to hunting trips or meetings, with a lot of name-dropping, than narratives.

Still, I laughed a couple times when the name-dropping happened. The only name I recognized was Ned Reynolds, a long-time fixture at the local television station. The stories and narratives are not often fixed into time, and putting Ned Reynolds’ name into it doesn’t help. Some of the stories were things like “Henry Schoolcraft, Teddy Roosevelt, Ned Reynolds, and I went turkey hunting….” Well, obviously not really, but the most enjoyment I got out of the book was from thinking this.

Unfortunately, it’s not a strong book in the narrative department and is probably only of interest to Cook, his family, perhaps the families of those whose name he dropped, and people like me who will read any book of local interest if it’s short enough.