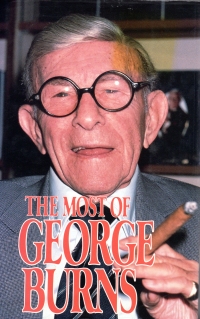 This book is a collection of four of George Burns’ books: Living It Up, The Third Time Around, Dr. Burns’ Prescription for Happiness, and Dear George. As such, it’s 780 pages, most of which I heard in George Burns’ voice as I read.

My goodness, it has been twenty years since he passed away. I guess I’d better say something about who George Burns was for you damn kids. He started out in vaudeville, and he married Gracie Allen and hit the big time. They moved from vaudeville to radio to movies and then later to television. When Gracie retired, he started a nightclub act and after a number of years, he started making movies again, including his Oscar-winning turn in The Sunshine Boys. After that film, he had a bit of a renaissance, appearing in the Oh God films and on television programs. And, apparently, writing best-selling books. When he wrote the first of these books, in 1976, he was eighty years old.

As a child of the late 1970s and 1980s, I knew of George Burns because of his aforementioned renaissance. He was a little fresher than some of the other older comedians from the radio and early television days that I saw on television like Red Buttons and Milton Berle.

Living It Up is memoir in nature and talks about his family life, his going into vaudeville, his radio program, and his television program. The chapters relay anecdotes along with jokes and a voice that isn’t taking itself too seriously. It talks about some of those early comedians I didn’t know when I was young and gives me some perspective on them. It’s written about the same time as the film starting his renaissance comes out.

The Third Time Around is another memoir, this one after he has returned to movies and has several under his belt, including the hit Oh God. He focuses a bit more on his later career and his work in the movies in the 1930s, but it’s still an entertaining look back.

Dr. Burns’ Prescription for Happiness and Dear George are humor books written around the George Burns character after the renaissance. Both feature a lot of pictures with George Burns around attractive, eighties-styled women in various capacities and coalesce around a theme. In the first, Burns talks about what it is to be happy. Key: Get into a career, or at least work, you love. The second is a collection of ‘letters’ written to George Burns seeking advice, which he then gives in pithy one-liners. I was a bit disappointed with the last two books in the, er, book, because the first two had some weight, depth, and sense of George Burns as a person in them. These last two were George Burns, the character, instead. We never had this problem with Dave Barry, who was always Dave Barry the character (sometimes played by Harry Anderson, or Harry Stone, whichever was not the character).

The book missing within this book is How to Live to Be 100 – Or More which transits Burns from the memoirs to the humor. I’m pretty sure I have it here somewhere on the shelves. I also have the book that follows Dear George, Gracie: A Love Story. This thicker book I uncovered recently. It looks to be more memoirish, so I’m looking forward to reading it sometime. But not immediately.

I’m glad to have read this book and to have learned more about George Burns. As a product of the era of his renaissance, I have affection in my heart for the man, and I think he lived an interesting life spanning multiple eras in history–from vaudeville to radio to television to movies and to the semi-modern era (come on, at 120, Burns would be all on the Internet with help) but also through eras of personal life, from youth to time in vaudeville to the success with Gracie (across eras) to the renaissance and beyond. It’s inspiring to see that with the right attitude, sense of humor, and gag writers, one can perservere and thrive for a long time.

Hopefully, this lesson does not only apply to entertainers.