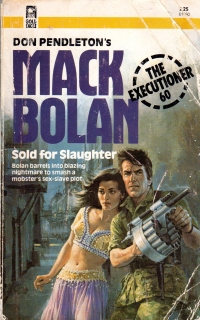 This book breaks again from the terrorist angle and returns Mack Bolan to fighting organized crime, albeit with an international flavor. Mack Bolan goes looking for Smiley Dublin, one of the Ranger girls that played recurring parts in his original war with the mafia. She was investigating human trafficking, and Bolan finds her at a human flesh auction in Kansas run by a Mafioso. He frees her and then starts tracking the human trafficking (and more) back to its source in Algiers. The source is a triumvirate of stock bad guys, and Bolan works to disrupt their operations.

It’s not too bad of an entry–Bolan doesn’t smoke, so there’s that–but the books are getting to be of a stock type with name checking of currently trendy weapons, easy head shots, and action that borders on absurd, but cinematic. As I’ve said in my self-defense, the books are what they are: television episodes in paragraph form. Sometimes, they rise up to surprise you. This one only surprised me in a oh, come on fashion. The female character is treated very poorly: Although she’s supposed to be an elite secret agent, she tags along to Algiers for one reason: To defy Bolan’s orders to stay put and to get captured again transparently to be rescued again.

At any rate, if these books continue to lightly disappoint, I’ll probably slow down on them again. I’ve read about 50 of the titles in The Executioner series so far (not bad since this is #60), and I have 80 something to go in the assorted properties. To give you an idea of my pacing, I read #20 which also featured Smiley Dublin in 2011. As I’ve picked up the pace, it’s only taken me since since February to read the 1983 books in the series. So I was going for it. Now I’m going to taper off on them and work in some better books, I think.

One thing about this edition: Although the book bears no library markings, the inside of the back cover has some date stamps which would seem to indicate this was in a library of some sort at one time: 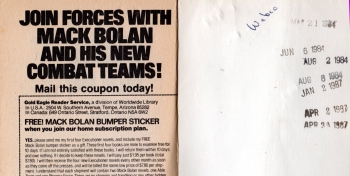 I wonder what that was all about.

Also, since “Don Pendleton” writes about the book’s author in an afterward in these new volumes, I’m starting to put the stated author’s name with the book. For completeness sake. Although for ease of searching, I should continue to mention “Don Pendleton” in each post.