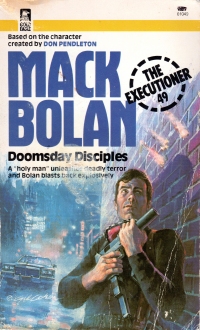 This book is the 49th in the Executioner series, and it came out when I was eleven years old. Its plot is topical of the 1970s, but because it was tropish in the 1970s, it seems fresher and more twisty because I’m used to twenty-first century tropes.

The Executioner is looking into a religious cult with ties to the Russians; the daughter of a Senator has joined this group, and in the first set piece, they’re about to take the young lady for the last ride before Mack Bolan intercedes and rescues her. He then proceeds to dismantle the operation of the cult which was founded by a Vietnamese Buddhist with the goal of warping the youth of America and sowing destruction in the American homeland.

So in the 21st century, when you hear about a religious cult, you’re expecting an extreme Christian sect (which, in the news, is pretty much all Christians except maybe Episcopalians). But this book capitalizes on the popularization of Buddhism in the 1970s, when it was a pretty new and fadish thing. So although a reader in 1983 would have found this to capitalize (and maybe exploit) contemporary trends and fads, in the 21st century those fads are mostly forgotten and we get something fresh.

I enjoyed the book pretty well for a post-Pendleton entry in the series.

Any time I enjoy them, I’m hopeful, because I have 61 Executioner books, 10 Stony Man, 17 Mack Bolan adventures, and 7 Able Team books from the mythos yet on my shelves. When I read one I don’t like, I think I’ll never get through them. When I read one I do, I have hope I’ll stomach it.

At least the number of them I see in the wild has tailed off so I’m not adding a bunch more to the shelves as I go (although the Spring book sales are a month away, and this assertion is subject to change).