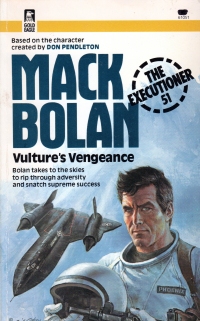 This book is a pretty good entry in the series. Perhaps I’m far enough away from reading a bunch of them in a row (Doomsday Disciples notwithstanding) that I’m not overwhelmed by the similarity of the plot (woman in distress, Bolan must penetrate hard sites).

In this particular case, Vietnam veterans are being–kidnapped? and used as forced labor/mercenaries by a Central American warlord who kills a popular ambassador and kidnaps the wife who is a popular spokesperson for human rights. The warlord rigs a plane and stages what looks to be an attack on the White House with an unpiloted plane carrying the woman, but after Bolan averts the crisis, it turns out that she’s still a captive in his Nicouraguan lair. Which Bolan must then attack to get the bad guys out.

The story is an eighties product all the way: The Uzi is an unstoppable killing machine, and the Harrier jump jet is all that. Funny thing is that one of the bits has Bolan downing a jet with an Uzi, and I would have thought that utterly preposterous–except that earlier in the week, I’d heard the story of Owen J. Baggett who purportedly shot down a Zero in World War II with his handgun while parachuting from a disabled bomber. So forty-three years after this book came out, I was primed to get the allusion / homage that the author of the Bolan book was making. And it made the Bolan action seem less preposterous than it could have.

Except then Bolan shoots down a couple of attack helicopters with a handgun. So.

At any rate, I’m mellowing on these post-Pendleton books because I’m starting to consider them the equivalent of episodic television. I mean, the plots are the same, the characters the same, and the bad guys just about interchangeable–but I’m enjoying them as light reading while I’m reading them.

Unfortunately, that’s going to mean my measuring stick for these things is going to be whether than they’re better or worse than the ones I read immediately preceding them. If you’re not into these kinds of books, this won’t be the one to make you a fan.