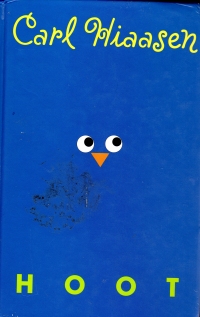 This book is Carl Hiaasen’s first YA book. And it shows. It’s like a Hiaasen story shrunken to kid-sized, and poorly.

First, the plot: A new kid from Montana moves to Florida and sees a barefoot kid running while riding on the bus is getting bullied. He clocks the bully and runs out to follow the kid. He discovers a semi-feral runaway who’s conducting a campaign of vandalism to protect a couple nests of owls from development of a pancake house.

I’ve flagged a bunch of things in the book that don’t ring true. For example, the protagonist reads an X-Man comic. The boy is fresh from Montana, but describes the trees and flora with exactitude unbefitting a middle schooler. Twenty-first century middle school bullies tormenting the new kid by calling him Roy Rogers-hardt (who past the Baby Boomers and a couple Gen Xers know who Roy Rogers is?) A friend says the bully called in sick to school. Kids riding on the handlebars of bikes–do they do this now? One middle schooler says “Why do you care about this kid?”–what kid calls another kid a kid to another kid? “The dead man was soaked with blood and twisted at odd angles, like a broken G.I. Joe doll.” GI Joe, as you might know, was never marketed as a doll, and the action figures from the 1980s and beyond were not as articulated as the GI Joes of Hiaasen’s youth, so I’m not sure if the metaphor makes us think of what he’s thinking of.

Coupled with the simplistic environmental message with caricatures for bad guys, I didn’t care for this book that much. I’m probably not going to hunt down more Hiaasen YA books, but I’m hopeful he gets back to writing adult books. But all the thriller writers, it seems, are deep in the YA market these days. I mean, my son reads a lot of James Patterson, for crying out loud.

As to this book, it’s take it or leave it, even if you’re a Hiaasen fan.