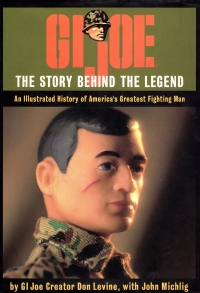 This book describes the creating of the G.I. Joe action figure (the original, not the Real American Hero we grew up with in the 1980s) from its inspiration through design and the initial manufacture. It includes a number of pictures, but it’s not a picture book. It’s the story, told by the artistic director of Hasbro, along with accounts from other people in the process.

As such, it’s not so much about the stories and narratives that would become part of the comics or the television series. Instead, it’s a look inside the toy business and how something like this got built from the ground up in the middle 1960s, from pitching it to the company CEO to handling production overseas (which was a new step for Hasbro).

An interesting story, indeed. At 92 pages, it’s more of a written oral history than a scholarly work, so I read pretty quickly. I am quite disappointed, though: The book seems to indicate it was bundled with a commemorative GI Joe of some sort, and all I got was the book. For a buck, I guess I can’t ask for more.