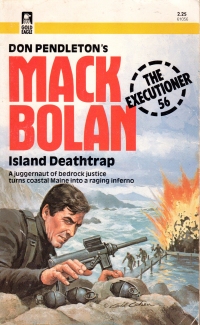 I read this book right after Paradine’s Guantlet because the teaser in the back of the book made the plot look interesting and it looked like the books were going to take on a new direction with Mack Bolan operating more alone.

This book is definitely a more complicated plot: A remote island in Maine is being used as a delivery point for people and things being smuggled into the United States, and hard men have cowed and impressed locals into helping out. One man contacts Washington for help, and they send Bolan. When Bolan arrives, he finds his contact dead and a teen relative out for revenge. The teen’s girl has been kidnapped to compel her father’s help, and they together invade the island.

Instead of straight dot-to-dot connection of the set pieces, though, we have some people working at cross-purposes and some turns that add a bit of depth to the proceedings. So I enjoyed the book more than it its immediate predecessor, and I’ll eventually get used to the up-and-down nature of the series after Pendleton.