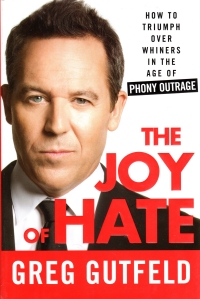 I bought this book earlier this year when my children were expending Easter gifts at the local Barnes and Noble. This autographed copy was on the discount table way in the back, so I picked it up.

Written during the run-up to the 2012 election, the book talks about how ‘sensitive’ people are getting and how to not get caught up in it. Just kidding: It’s mostly pointing out and mocking people who have taken it upon themselves to monitor our thoughts and behavior, often with the coercive power of the state.

It’s only gotten worse in the interim, of course.

It’s a political book, so I don’t get much more out of it than I get out of my too-steady daily diet of political blogs except for an autograph which I’m practicing forging to complete my dead-on impersonation of Gutfeld. Once I do that, I can take over his life, which has been my lifelong dream since I just wrote that sentence three seconds ago.

However, the zany comic asides that mark Gutfeld’s on-screen persona carry over well into the written work, so it makes the book more enjoyable to read than more earnest commentators.

So if you’re jonesing for some sadly undated commentary on the modern left, you could do worse.