At the Friends of the Christian County Library book sale this fall, I bought this family looking film:

Ha ha, sucker! It is not a Grizzly Adams movie. 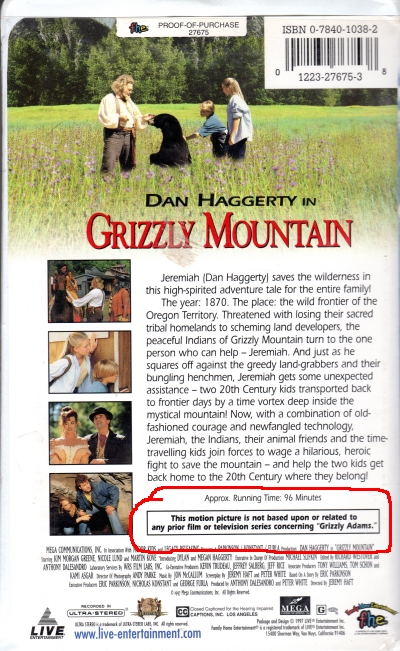 Man, I’m the target audience for this film: parents who were, a long time ago, sort of fans of the Grizzly Adams television show because it was syndicated and played a couple times a week on the local stations before cable.

Instead, this a a fin-de-siècle environmental pageant about how developing natural areas is de rigueur. The plot features a family camping in an undeveloped Oregon forest whose 125 year lease to an Indian tribe is about to expire. The father is a state functionary of some sort, looking over the land as he plans to approve development of the land. So two of his children enter a cave on the land and are transported back to 1870, when a greedy railroad executive also plans to develop the land, and his cold, distant beau uses a fake gold scheme to swindle the townsfolk. So it’s up to Grizzly Adams Jeremiah, Gentle Ben Jack, some Indians, the children, and hijinks to stop the bad guys.

There’s definitely some fun in the naming. Haggerty’s character is Jeremiah; is this a nod to Jeremiah Johnson, a film about another mountain man that preceded the Grizzly Adams television series (which itself might have tried to capitalize on the success of that film)? The bear is named Jack; as you know, Jack was the name of another character in the television show. And the show unreservedly calls the natives “Indians,” which was already a no-no in 1997.

At any rate, it’s a low budget little affair; there are about five sets (six if you count “the woods”). Haggerty is older and suffers from breathing difficulties throughout. So it’s a direct-to-video style thing, and as I mentioned, it’s a parable about the evils of development. But it’s not that I wish I’d spent the time watching something else.

I did have a bit of a talk with my children after it though, as I so often do. This is a message movie, I remind them. It simplifies the lives of Indians, it softens the real nature of wildlife, and it takes out all possibility that development can also be a good and man can manage development in rural and natural areas without the default despoilment depicted by Hollywood.

In researching the film post-viewing, I found there’s actually a 2000 sequel, Escape to Grizzly Mountain, a fin-de-siècle animal rights pageant that also stars Jan-Michael Vincent of Airwolf. I almost want to see it.