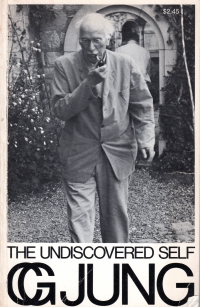 I picked up this trade paperback because I’m running out of good, smart-looking mass market paperbacks to be my carry book. As such, I could not stick it into my pocket for easy travel, but I guess I don’t need that as much as I thought, since most of my outside-the-home reading places have places for me to stow books when not in use.

I enjoyed this book, as you might guess by my posts quoting it (here and here). It’s styled as a psychology book, but Jung really gets more into philosophy than psychology. He discusses the role and experience of the individual relative to mass movements, both the State and the Church and discusses how the individual gets wrapped up in them and how they in turn enwrapture the individual to the individual’s detriment.

Of course, I agreed with the assessments of the individual versus the State. For people of a certain stripe, like me, trends have indicated the Federal government is creeping and sometimes bolting towards an omnipresent I didn’t agree with the assessment of the Church, though. Perhaps it’s because I attend a less centralized church than the Catholic church or because I’m up close and personal with the people who make up the church that I can see the atoms in the conceptual object, but I don’t see it as monolithic as the State. I guess one could say the State is likewise composed of well-meaning individuals who sometimes go astray in pursuit of well-meaning ends, but the State and the Church are different in that the Church has to operate through spiritual and moral suasion and the State has the military and law enforcement to compel its well-meaning urges. So they are very different indeed.

It’s been a while since I actually read this book (I finished it way back in July), but I’ve put off posting about it because I took a lot of notes on it and considered writing a really long, thoughtful post on it. In addition to the wisdom of posts linked above, I took some notes like this:

So where was I? Oh, yes, digressing and rambling. The notes are as far as I got into a thoughtful post.

At any rate, Jung comes at the questions as a psychologist, which means his entry point into the questions is the discrete experiences of individuals, and he conceptualizes and generalizes from their to his conclusions. So where I disagree with him on the greater meanings and movements of Modern Man, it’s from these faulty macro-level concepts and less on the experiences and recommendations made for individuals in the milieu. Well, I also reject a priori the idea that the whole of reality depends upon the psyche. No, the individual’s experience and the shared and transmitted experience relies on psyche, consciousness, and communication, but not the world itself.

So I feel smarter for having read the book even though I didn’t agree with some of it. What a difference between modern books; is it possible to read something written in the last twenty years that won’t insult people who disagree?