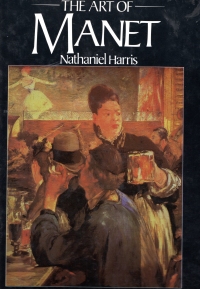 Okay, John, I read this book outside of a football game, and I didn’t get much more out of it than if I’d read it during a football game. Mostly, it’s about looking at the pictures. Even when given the opportunity, I didn’t linger on the pictures or particularly study them. I assessed whether I liked them or not and whether I thought they were good or not, and then I moved onto the next or the text describing the artist’s life and relationship with his peers.

The goal is to get a better familiarity with the artist, and I did. So I can speak intelligently about Manet and his relationship with the Impressionists and whatnot. And I can say I like Manet not quite as much as Renoir, but better than Monet and Degas.

At any rate, Manet is the old man of the Impressionists; he preceded the movement and dabbled with it, but his relationship with the formal French art structure of the end of the 19th century (I almost said “Last century” and then I realized how old I am) differed from the young ones. He wanted acceptance and commercial success (and got some degree of it), but he also alienated the academy with some of his work, subjects, and treatments. He also provided support for the young Impressionists who would eventually surpass him.

So it’s worth a browse whether during a football game or not. If nothing else, browsing the book helped me comprehensively identify my favorite Manet painting (The Bar at the Folies-Bergère).